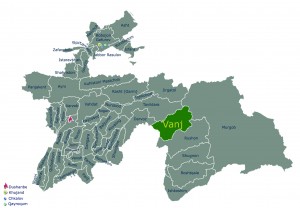 Vanj – a mountainous region of the Republic of Tajikistan, with a population of 42.3 thousand people in 2016, and the territory of 4.4 thousand sq. m.. kilometers is located in the Gorno Badakhshan Autonomous Region of Tajikistan, formed of 29.05.1933

The name of the area as referred to in the literature as the materials “or Vanj – Vyandzh”, but in their native Tajik language is written as “Ванҷ”. Previously, the area was called Roharvom (Roharav) in honor of the eponymous river and valley.

The administrative center of the district is the town Vanj. The district consists of 6 rural communities who are called jamoats such as: Vanj with a population of 12.7 thousand, 2.9 thousand Vodhud, Jovid 3.8 thousand, 5.7 thousand Rowand, Teharv 3.9 thousand…. ., and Yazgulom 7.9 thousand. Distance from Vanj to Khorog (171 km.) and from Dushanbe to Vanj (527 km.). Economy of the region is mainly dependent on agriculture as there are no companies producing and processing.

Vanj area is located between Darvoz and Yazgulam  ridges. It has borders with the Tavildara region, in the east with the Murghab district, in the south with the Rushan district, on the west by Darvoz area of ​​Tajikistan and Afghanistan province of Badakhshan. Vanj area from the north-east to south-west and cross the river Vanj Yazgulom.

Telephone contacts the main bodies of the district Vanj:

The weather in the Leninsky district: