Sadbarg – is one of the well-known building complex in Dushanbe where today’s of being a successful trade and provided various types of household services. Sadbarg located in the center of the city on the southern part of the prospectus at Rudaki (Rudaki ave. 2) and consists of a 7-floor building. Location Sadbrag very popular place since it is on a semi-circular road where the most prestigious buildings of the city such as the Hotel Poytaht, National University, Kazkommertsbank and others. 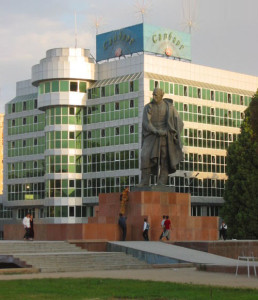 Traditionally, trade was developed in capital of Tajikistan, which is why the capital is located, and the largest shopping facilities. Along with many markets, there are modern, large-scale shopping centers.

However, an important place for every native of Dushanbe is a Shopping Center “Sadbarg”. However, the trade center, he was not always so. Originally, this building was built in the 60s of the last century, it was conceived as a home life. Previously, there are shops, dry cleaning, repair shop of leather goods, watches and shoes, couture, sewing workshop.

The main advantage of “Sadbarg” shopping center is its location. Near the area of ​​them. S. Ayni hotel “Poytaht”, the building of the former united historical-museum of local lore. K. Behzod, a large store selling stationery products “Book World” and the railway station of the city of Dushanbe. Of course, each of these buildings have historical value and are native to each of the residents.

On the first floor there are ATMs and POS-terminals, pharmacy, optics, Computer Stores, service centers and catering.

Meanwhile, at this point there are drawbacks – the lack of parking spaces. Often the drivers park their cars in two lines of the carriageway, take even the sidewalks, creating noise, not only for drivers but also for pedestrians. Despite the periodical activities to identify and bring to justice violators drivers until city authorities can not solve this problem.