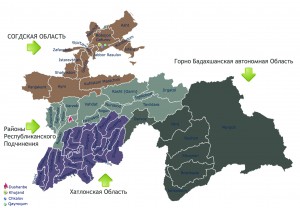 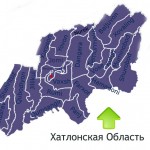 Khatlon region (abbreviated Xatlon) – one of the most populated and irrigated areas of Tajikistan is located in the southwestern part of the country with a population of 2.98 million people, representing 35% of the population of RT..

Khatlon region is famous for its high quality cotton, early watermelons, melons, onions, a cement plant, the Nurek, Chemistry Works, the Javan and Sarband, Vakhsh River, a seating area Chiluchorchashma, historical places like Vose, Kurgantyube who were ancient cities with thousands of years of history.

Sughd region (abbreviated or Tajik Sughd “Suғd”) – one of the most developed regions of Tajikistan, located in the northern part of the country with a population of 2.35 million people, representing 35% of the population of RT.. 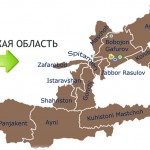 It was formed on 10 November 2000 (previously, the 10/27/1939 as the Leninabad) and the administrative center of Sughd region is the city of Khujand. The composition of the Sogd region consists of 8 cities and 10 regions including the city Khujand, Kayrokum, Taboshar, Chkalov, Istaravshan, Penjikent, Kanibadam, Isfara and Ayni Asht, Ganci, Zafarabad, Maschtoi Kuhi, Spitamen, Mastcha, Jabor Rasulov, B . Gafurov. 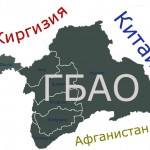 Gorno Badakhshan Autonomous Region (GBAO abbreviated or Tajik “VMKB”) – one of the most mountainous, sparsely populated, underdeveloped and large areas of Tajikistan is located in the eastern part of the country with a population of 226 thousand people, which is only lisch 2.7% of the population..

GBAO formed on January 2, 1925 the administrative center of the region is the city of Khorog. The composition of GBAO includes 1 city and 7 districts including Khorog and districts Vanj, Ishkashim, Murghab, Roshtkala, Darwaz and Rushan Shugnan.

Badakhshan region of highlands known for its peculiar dialect, precious stones, expensive in China and resort Garmchashma. Economic and social life in GBAO is underdeveloped due to the mountainous terrain and lack of resources, including irrigated land, labor force and communicatively location. 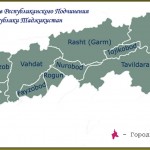 Districts of Republican Subordination (abbreviated – DRS) – This is the land and the administrative area is located in the geographical center of the Republic of Tajikistan in the territory of which includes 13 districts including 3 city, is divided into 2 valleys (Gissar and Rasht) with a population of 1.9 million people and a territory 29. 8 thousand sq. km., has officially formed March 29, 1932 without the empowerment of the regional administration.
From the west border with Uzbekistan, in the south – Khatlon region as well as with Afghanistan, with the northern part of the RRS is Sughd region of Tajikistan and the border with the Republic of Kyrgyzstan, and from the east to the area of ​​Gorno Badakhshan of Tajikistan.
The western part of which is called RRS Hissar valley is the most densely populated part of the region consists of 7 districts including Tursunzade Shahrinau, Hissar, Varzob, Vahdat, Rudaki and Faizabad having more irrigated land for the production of various agricultural crops.

History of regions of Tajikistan:

In 1944, part of Kulyab and Stalin Abad was founded Qurghonteppa Oblast, and a year of part of the Leninabad – Ura-Tyube.
Since 1947 it began the process of eliminating areas. Then they were eliminated Kurgan-Tube and Ura-Tyube region, in 1951 – Stalinabad, 1955 – Garm and Kulyab and in 1962 – Leninabad region. Thus, the regional division of the Tajik Soviet Socialist Republic was abolished.
Since 1970, the region begin to rebuild. At the end of 1970 has been restored Leninabad province, after three years – Kulyab region, even after 3.5 years – Qurghonteppa Oblast.
In 1988, Kulyab and Kurgan-Tube region were united in the Khatlon region, but were again divided in three years.
In independent Tajikistan Khatlon Province, and in 2000 renamed Leninabad region in Sogd was restored in September 1992; the area became known as velayat.