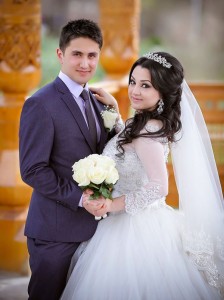 Wedding for the Tajiks is one of the greatest events for fun and time spending. On average, Tajikistan held 25 thousand wedding every year. Wedding events and create new family, which requires a monthly chores and 5-7 ths.$  financial costs. Sometimes of course, that the facts of the day and just a couple of bucks for weddings, but this is not due primarily from the pocket and the reason lies in the attitudes and problems.

Historically, weddings in Tajikistan are also considered to be an important event and the one who followed him, necessarily had to treat their relatives, neighbors, friends, and leaders of the edge wedding – beautiful dastarkhan (table). 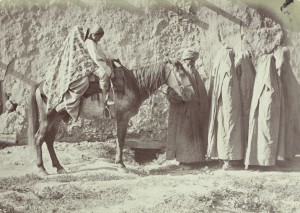 Prior to joining the territory of the Russian Tajiks in Central Asia wedding held at least modest and not been drinking, pomp, night concerts and fights at weddings. After the end of World War II and the advent of better times people spend wedding events up to one week. The first day was a treat for distant friends, the second day for one-villagers, the third day for the groomsmen, the fourth day for the friends of the groom mother, the fifth day for groomsmen father, the sixth day for the family, and finally the seventh day for all who remained.

Until recent times to marry in Tajikistan of the groom was required to pay a tribute (Dowry) for the girl, and then start the wedding but after the collapse of the Union of the economic crisis pushed the historical habit in most parts of Tajikistan. If now required Kalym it in a small area in the 100-500 US dollars.

Parents know that if they overstate the amount of tribute they show their inadequacy to the groom’s family and give great risk to their daughters will be left without the groom. Therefore, the sooner they will be given their daughters the better for their honor. 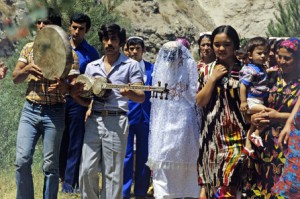 Many people know that a lot of young guys go after the collapse of the USSR abroad and marry foreign women in particular on Russian girls and so the question to give daughters in marriage becomes problematic for parents and the country’s leadership.

Typically, the Tajik family made so that the groom did not choose his wife. The choice of the bride usually entrusted to mothers in 40% of cases, -x. In 25% of the responsibility of fathers, 15% of guys and 20% in other cases.

After the advent of the Internet and due to the fact that most of the children themselves make a living that they themselves are looking for brides and prefer to live on their own. Recently, it became apparent that in order to strengthen the family fathers girls sometimes give cars and even at home husbands their daughters (in-law).

And so on the day of the wedding in Tajikistan:

Often the wedding day is selected weekends and in no case should not be in the month of Ramadan as the majority of the people to fast in this month. Modern Tajikistan early in the morning is given a treat to all the relatives and friends but no more than 150 people according to the law. Somewhere between 10:00 groom goes to the daughter and they are sent to the house for the wedding registration of marriage (*), and then go to the celebrations in the sights of places for fun and pleasure as well as photo and video recording. After the celebrations the newlyweds and their few friends – native daughter returned to the shelter to help themselves.

As a guest on the tradition aunt daughter bring gifts to the groom and dress national costume. All guests bring sweet water in the hope that all drank for a long sweet newlywed life. For the daughter’s father repeatedly comes to the guests and tell them your respect as a sign of respect for the family and guests of the groom.

After the feast (30-40 minutes) with the purpose and father of the bride to the groom is allowed to take away a daughter to him. Thus goes the groom with his friend, a witness to the daughter where she is surrounded by friends and family for Chimylikom (curtain).

Some time for chimylikom newlyweds are also to be removed in the photo and video and then a music (tablak, surnay, karnay) they go on the road to the house of the groom. At this point, the girls usually fall at the feet of their fathers and crying because of the fact that they leave the family home and other people will come. It is also a sign of high respect and love their parents, and the final petition to the consent of the marriage. 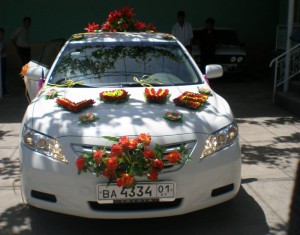 A restaurant in the villages of the bride usually waiting at the home of the groom to carry out the ritual of “Understanding” and “Washing”. With the daughter on the road accompanied by his own man (brother, uncle or grandfather) and he sits down to the front, next to the driver. Along the way the guys are not familiar of the place where the girl lives may block the road and demand tribute for the reason that they did not get the girl as a daughter, or from the fact that they have saved her groom from the outside. Suffice it to $ 10-20 as a fee to the road opened and should not be fed excessive bribery.

How come a girl threshold groom home she did not immediately get out of the car. Again, in the amount of need tribute somewhere $ 50-100 for a loved one daughter as a sign of respect for what they have brought to the integrity of her to the threshold of the house of the groom. Without belittling trades and also a process that lasts about 10-20 minutes, tasteless Tajiks and most of the inhabitants of Central Asia.

After reports of the bride receive a fee, it is on the threshold of the door to go home with the groom’s covered face and body in a national suit or veil. Mother and daughter ceremonially welcomed they make dancing and fun for about 20 minutes and daughter go to the groom’s house, and already at this point is usually the groom is already there does not participate in further rituals to the restaurant. That is, in most cases, the groom from the bride to the house of her house gets no daughter. Daughter-usually bring her family to the groom’s house as a sign of respect. But in a secular society the groom himself to bring his daughter to his house as a sign of courage and receiving trophy.

After the daughter comes into the house and finds her family and her friends come to them in the room father and mother of the groom, and welcomes all the guests and especially the daughter. After that, in deference to the daughter-in guests (women) bring gifts, and look at the beauty of the bride. Approximately 50-70 people in this ritual familiarity and curiosity daughter participates. 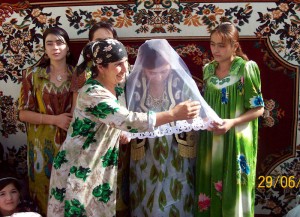 Mother of the groom with the aim to have the bride were skilled hands and a successful life is to bring the flour and butter to make it fictitiously prepared just waking guests cake. Naturally daughter symbolic does this work in homage to the guests and relatives and thus shows its simplicity and humility. For the groom to come into the house and greets his wife.
Thus the daughter with her fiance and then go to the restaurant for a sumptuous wedding venue in which they also dance along with the guests. According to the law evening wedding event can not last Bole 2 hours and the number of visitors is strictly regulated by law and controlled by special organs. The penalty for violation of the Act from 500 to 10 thousand. USD.

Download music for which is accompanied by the bride and groom at a wedding http://smartmusic.tj/view/107783 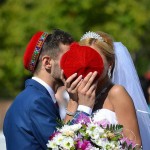 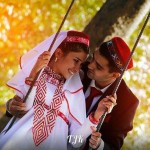 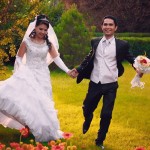 Remember that although Tajikistan is a small country but it wedding rituals are performed in different ways due to the fact that the nation is divided into secular and rural, religious and customary, the north and south as well as Badakhshan.

* As for the wedding time, it will take place one day before the wedding and it is called “nikokh”. Tajik wedding must produce according to the requirements of the religion of Islam from the daughter home before the young are making love.