The currency of Tajikistan today is “Somoni” which was put into circulation from 30 October 2000 and is named after the founder of the first Tajik state, Ismail Samani. It contains coins from himself by the name of “Diram” and paper banknotes. In international relations it has the code “972” with the sign TJS (in ISO 4217). The word “Currency” in Tajik “Asor” and the money is “Pool.”

History: The oldest currency (money-coins) discovered in Tajikistan were Achaemenid gold Darik, (VI and V centuries. BC. E.) Presented in the famous Amu Darya treasure, discovered back in 1878 in Kabadienskom area.

Historically Tajik Samanid state existed 875-999 years, the Tajik currency was “Diram.” It is today the Tajik coin named after these historic Tajik money.

After the formation of the Tajik SSR in 1924 on the territory of Tajikistan as well as in other countries, the Soviet Union was in circulation until January 8, 1994, the currency name “ruble”.

After independence in 1991, Tajikistan was unable to keep its own currency in circulation as the country of fierce inter-clan armed conflicts intraethnic. On this basis in Tajikistan as well as in other countries of the former Soviet Union to a certain time left to handle Soviet money which has become very vulnerable.

Given the negative factors which adversely affected the country’s economy the leadership of Tajikistan has taken the decision on the temporary introduction of the currency in circulation of the Russian Federation from 8 January 1994 to 10 May 1995. One of the worst factors in these years was that Soviet money that neighboring countries have been removed from circulation underground ways to enter the market of Tajikistan and bought up all that was on sale, and it contributed to the unprecedented inflation. Besides the Soviet money it has been vulnerable to counterfeiting since the border had already been discovered and introduced free trade relations with all countries of the world, thus allowing to make advanced technologies for the production of banknotes, etc ..

Own national currency called “Tajik ruble” finally Tajikistan was able to put into circulation according to the decree of the President of the Republic of Tajikistan dated May 6, 1995 № 8 (324) from 10 May 1995 to 29 October 2000 which were printed in Russia and it has given Tajikistan to take full As to settle their own monetary policy and thus have a positive impact on the economy of Tajikistan.
Due to the fact that the Tajik ruble, heavily depreciated against other currencies of the world and had a high quality including the protection of podelnichestva, the country’s leadership, including Almardonovu had put into circulation Bole modern banknotes with national elements by printing them Germany in 1999.

In denominations of the new currency (TJS) portraits of prominent figures of the present and past of the Tajik people and izobrazhenyya architectural and historical monuments of Tajikistan, works of applied art and life of the Tajik people.

On 10th September 2010 were released modified variants of money (banknotes) par value of one, five, ten and twenty somoni altered color scheme, and along with them were released banknotes “3”, “200” and “500” somoni. But with the December 25, 2012 issued by modifying banknote “5” and “10” TJS additional holographic security elements. Also on 5 March 2013 in an appeal introduced new versions of banknotes “20”, “50” and “100” TJS with new security feature: the last three digits of the serial number printed on the kinegram with a laser and have a raised relief that It can be discerned with the naked eye and to the touch.

At present, the Tajik currency stability depend on the economies of Russia and the latter in its turn from oil rates. Since almost half of the work force in Tajikistan working in Russia, they are sent to Tajikistan foreign currency and thereby support the national currency and the economy as a whole. With the change in oil prices in world markets affects Currency Tajikistan. This shows the recent changes in oil prices in 1998, 2008, 2014-2015, 2016.

Over the past 15 years, the Tajik currency lost relativity to the US dollar 3-fold to rate 1 USD = 9 somoni (market), but analysts believe that this is not a cumulative point and it should in 2016 to reach a peak of 12.5 somoni. All this is due to the fact that the government is holding back the decline rate of the Tajik currency with the purpose to protect the citizens against the laws of the world economy and money.

To view the exchange rate at the discount rate of Tajikistan recommend checking out the website of the National Bank of Tajikistan for a detailed daily information. But to view the market rate of the Tajik currency should see the site Agroinvestbank.

Banknotes of the Tajik currency “Somoni”

500 Somoni. On the front side is shown a picture of the founder of one of the Tajik classical literature Abu Abdalloi Rudaki (858-941) and on the opposite side of the Palace of the Nation. Dimensions currency (banknotes) 162 × 71 mm. In circulation since September 10, 2010. Colours: blue yellow.

100 Somoni. On the front side of the picture is the founder of the State of Samanids Abu Ibrahim ibn Ahmad Ismail Samani (849-907), and on the opposite side of the Presidential Palace. Dimensions 156 × 65 mm. In circulation since 2000. Colours: brown and blue.

50 Somoni. On the front side of the picture is a scientist, statesman of Tajikistan
Bobojan Gafurov (1908-1977), and on the opposite side of the tea-house “Sino” in Isfara district. Dimensions 153 × 65 mm. In circulation since 2000. Colours: blue and yellow.

20 Somoni. On the front side of the picture shows the philosopher and physician, scholar and lexicographer Abu Ali Hussain ibn Abdallah ibn Sina (Avicenna) (980-1037) and on the opposite side of the Hissar fortress. Dimensions currency (banknotes) 150 × 65 mm. In his address to the September 10, 2000. Colours: brown and blue.

5 Somoni. On the front side is shown a picture of the founder of modern Tajik literature
Aini (1878-1954) and on the opposite side of the Mausoleum of Abu Abdullah Rudaki in Penjikent district. Dimensions of the banknote 144 × 65 mm. In his address to the September 10, 2000. Color: Blue.

3 Somoni. On the front side of the picture shows the hero of Tajikistan, Tajik statesman
Shirinsho Shotemor (1899-1937) and on the opposite side of the building of the Parliament of Tajikistan. Dimensions of the banknote 141 × 65 mm. In circulation since 2010. Color: Purple.

1 Somoni. On the front side of the picture shows the poet, public figure Tajikistan
Mirzo Tursunzade (1911-1977) and on the opposite side of the building of the National Bank of Tajikistan. Dimensions of the banknote 141 × 65 mm. In circulation since 2000. Green colour.

Worth to say that between the Tajik paper money also has metal molds called them as S0omoni and Diram. That is, the metal somoni also have to handle them but treats people is undesirable because not easy to use. Known such metal TJS denominated as “1”, “3” and “5” TJS.

Also, for the purpose of donation and storage of currency issued commemorative coins made of precious materials including gold – in denominations of 50, 100 and 200 somoni and silver denominations of “1,” “3,” “5,” “502,” 100 “and” 500 “somoni. There are also from the non precious metal (bimetal – the nominal value of 3 and 5 somoni, cupro-nickel and nickel silver – in denominations of 1 somoni), since 2004, when they were issued four coins dedicated to the 10th anniversary of the Constitution of Tajikistan and the 80th anniversary of Dushanbe. they can be found in the commercial banks and the National Bank of Tajikistan Tajikistan. 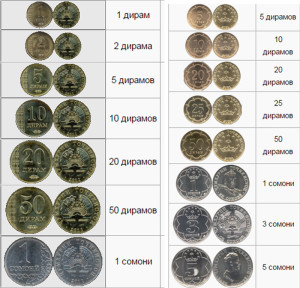 Another story about Tajik money

Ancient Bactria and Sogd, which included the territory of modern Tajikistan is an important part of the Achaemenid Empire, and were included in the orbit of the ancient international trade between the East and the West.

Money in Tajikistan was further developed at the Alexander the Great and the Seleucids (IV – III centuries mid BC). It is noteworthy that at the beginning Antioch I to III. BC. in Bactria functioned Mint, which produced large silver coin (tetradrachm) with the name and portrait of the king.

On Kushan coins dominated subjects related to zaroastriyskoy religion. At the same time Kushan kings carried out a moderate policy of religious tolerance and placed on his coins the image of the Indian god Shiva and Buddha. They bring together the different peoples and cultures that have coexisted peacefully and successfully developed.

In the Middle Ages, monetary circulation reached its highest dawn on the first centralized state of Tajiks Samanids in the ninth and tenth centuries. When more than 30 cities and Khorasan Maverannahr operated mints.

Samanid dirhams accessed not only within that country but also far beyond.
Further growth of monetary Central Asia linked to the Timurid era (the fifteenth century.). Large copper hoards of coins found in the Timurid .Dushanbe, Khujand, Hissar, Regar and elsewhere.
Coinage continued in Central Asia up to 1920 by the end of the reign of the last Emir of Bukhara Said Alimkhan have to issuance of the first paper money on the territory of Central Asia, which is called “Tango” in the likeness of existing silver coins.

Were put into circulation banknotes nominal value of 20, 50, 100, 300, 500, 1000, 2000, 5000, 10000 tango.
In September 1920 in the territory of the Emirate was established Bukharan People’s Soviet Republic, which continued to produce the same notes with the emir’s no big change, including on the front of the banknote in the upper circle inscription “Released by order of His Majesty” was replaced with Soviet symbols – sickle and sheaf of wheat. There were also replaced with the name and the names of the officials. All the inscriptions on these money were executed in the Tajik language.