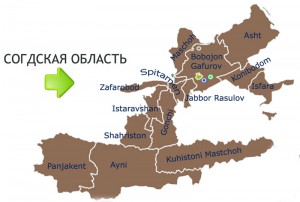 Sughd region (abbreviated or Tajik Sughd “Suғd”) – one of the most developed and most beautiful regions of Tajikistan, located in the northern part of the country with a population of 2.5 million people, representing 35% of the inhabitants of the republic..
Sogd founded 10th November 2000 (previously, the 10/27/1939 as the Leninabad). The administrative center of Sughd region is the city of Khujand. The composition of Sughd region consists of 8 cities and 10 areas listed below. The level of urbanization Sogd is 26% rural and 74%. The total density of the region on one km² of 93 people. Tajiks make up 68% of the population of the region, which have peculiar dialect.

The territory of Sogd is 25.4 thousand sq. Km and is located in the north of Tajikistan, in the Tien Shan and Gissar-Alai while the northern part is occupied by the south-west of the Ferghana Valley. Western and northern part of the region borders with Uzbekistan, the eastern part with Kyrgyzstan and the southern part with the districts of republican subordination.

The territory of Sogd largely mountainous. From the north ridge and located Kuramin Mogoltau mountains, from the south – the Turkestan Range and Zerafshan mountains.

In Sughd region are exclaves Vorukh and West Kalach located in the territory of Batken and Leylekskogorayonov Batken region of Kyrgyzstan, as well as Sarvak enclave, located in the Pap district of Namangan region of Uzbekistan.

The economy of Sughd region:

Sughd province – one of the most industrialized regions of the Republic of Tajikistan, which accounts for 17.2% of industrial production in the country of production. Sughd industry represents around 742 companies, of which 253 are medium and large.

The industrial sector of the region is mainly concentrated in the cities of Khujand, B. Gafurov, Isfara, Istaravshan, Penjikent, Kanibadam and Kairakkum, which accounted for over 60% of industrial production of the region annually produce goods and services to more than 2.1 billion. US dollars.

The industrial sector of the Sughd region, consisting of mining and processing industry includes sectors such as mining and mining, energy, light industry, metallurgy, machine building and construction.

In the structure of the industrial sector of Sughd region the predominant amount, more than 67% of production comes from the manufacturing industry. Region operate mining and processing of gold, silver, uranium, zinc, mercury, antimony and many other types of non-ferrous metals.

The identified bred depths of field are fulfilled or are in the development of more than 214 fields. The largest enterprises in these industries are: JV “Zarafshon”, Adrasman Mining and Processing Plant, Production Association “Vostokredmet” JV “Aprelevka”, “Dawn of the East”, etc. It is also very well developed turizv in the region where there is a resort Zumrad resort Bakhoriston, Camp Center Lake and Lake Iskaderkul Haftkul.

Culture and education in Sughd region:

It turns out cultural and educational services to the population of 425 mass and universal libraries with a total stock of books and magazines about 3.5 million. Copies, 345 club institutions, 6 theaters and 11 museums. The people of Soghd very famous in the country for its craft for the construction of the Tajik-style houses.
In the region there are 190 permanent preschool institutions, where educated 23 thousand. Children, 880 day schools, they trained more than 470 thous. Students, 17 technical schools and other secondary specialized educational institutions, with an enrollment of 8.3 thousand. Students and 11 independent higher schools, which educate 24 thousand. students.

Video of the administrative center of the Sogd region of Khujand:

Phones and contacts the Administration of Sughd region: