Samarkand – with a population of 0.5 million and an area of 120.3 square kilometers is the second ranking of cities of Uzbekistan in terms of geographic scale, the historical limitation, cultural values, economic development and other factors. 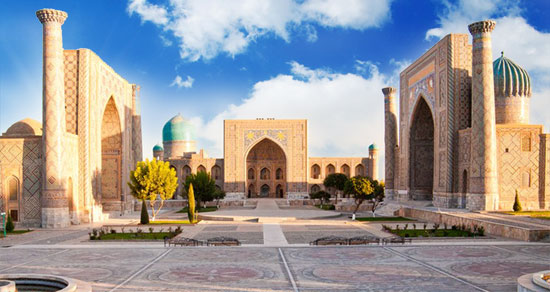 The uniqueness of Samarkand is that fmore than three thousand years it has often been the capital of the great Persian and Turkic states in the Central Asian region, which significantly contributed to the development of civilization, science and culture with the help of the great scholars among them boldly called Abu Ali Cina, Khayam , Rudaki, Jami, and others. Samarkand and today is a great city where each year comes millions of tourists from around the world to see the majesty of one of the ancient cradles of human civilization. Samarkand today demonstrates the production of cars refrigerators and other industrial products which do not make in other countries of Central -Asian region.

Samarkand is situated in the western part of between Zarafshan and Turkestan mountains in the territory of the plains of Samarkand region where the soil is very favorable for agriculture. Diameter of the city is 25 km. The geographical coordinates of the city  39*38 north latitude and 66* 57 east longitude. Altitude in the city ranges from 680-760 meters. Precipitation per year is 300 -400 mm. season that starts from September to the end of the month of May. The temperature of the air is released in the winter and in the summer to -25 to +43 overstated degrees Celsius. In short, the climate in Samarkand is continental-subtropical with particular separation seasons.