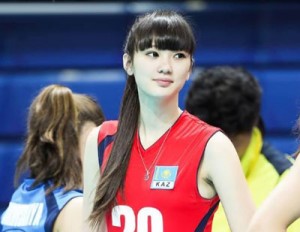 Altynbekova Sabina Abaevna – famous volleyball player of the Republic of Kazakhstan, was born on November 5, 1996 in the city of Aktobe. Popular as the most charming girl Asia and Kazakhstan. Physical data: Height – 182 cm and weight 60 kg..

Sabina 5 years of age start to dance professionally and with fourteen years was engaged in volleyball. He was an active member and captain of the club “Kazchrome”. Since 2012, when she was twelve years old made the team “Almatinochka-Almaty”, the second team was formed recently in Almaty. Participating in team won the silver medal of the Major League “A” of 2013-2014.

He matriculated in 2014godu. Sabine many times been invited to become a fashion designer, but she did not support this initiative alongside his mother (Nuripa) and Father. Sabina is not currently married.

With the leadership of the country in the Women’s Day.

The history of pop: After speaking at the Asian Games held in Chinese cities such as Taipei, on the Internet there was a photo of Sabina who really liked the audience and viewer InternetMedia including Facebook which resulted in about one hundred thousandth subscriber Bole and video prosmotrischikov Bole 2 million.

Due to the fact that the beauty of Sabina is associated with the appearance of the famous Japanese film actors took it as their own, and even compared to the anime doll of fairy tales.