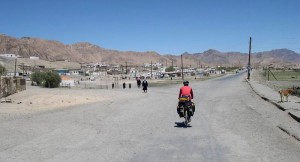 Murghab district on the photo

Murghab district – it is the largest district of Tajikistan’s territory which is at 99.9% and the number of population of the mountain quite small in relation to other areas of Tajikistan (. In 2015, 15 thousand.).

Territory Murgab very cold in the winter as it is located at an altitude of 3.7 km. more above sea level. The total area of ​​the Murghab is 38.1 thousand sq.  kilometers and its administrative center is the “town of Murghab.” The area is divided into 6 Jamoat (villages), including: 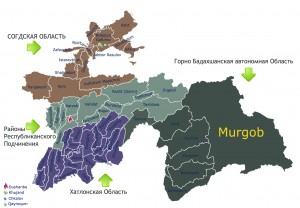 Murghab district is bordered on the north – Kyrgyzstan, from the east – China, on the south – west and Afghanistan – Badakhshan areas including: Vanj, Rushan, Shugnan, Roshtkala and Ishkashim as well as districts of republican subordination (Jirgatal and Tavildara).

By territorial subordination Murghab district Gornobadahshanskoy part of the Autonomous Region of the Republic of Tajikistan since 1924. On the southern tip of the village. Murghab is the entrance to the valley Madianskuyu. There is a tourist center as well as plenty of beautiful rivers and lakes, including “Sarez”, “Karakorum”

Through Murghab district passes Pamir highway. Pamir highway continues north – in the village of Sary-Tash and further to Osh (Kyrgyzstan) and in the south-west – to the capital of Badakhshan, Khorog (about 300 km from the Murghab distance). There is also a new road, which goes from the Murghab east through Kulma pass (about 80 kilometers) and in China goes to the Karakoram Highway. In Murghab there are 625 km of roads, including 400 km. of them are of national importance.

For a long time it was thought that the Murghab was founded in 1893 as a major strengthening of the Russian Pamirs called Pamir post. Builder has been strengthening military engineer Captain “Serebrennikov”. In another, more recent publications said that Murghab was founded 26 (Articles 13) in July 1903 as the new barracks Russian strengthen the Pamirs named “Pamir post” was located in the village before Cooney Kurgan.

Builder has been strengthening military engineer Colonel Nikolai Nikitich Moses under the chief of the Pamir detachment A.E.Snesareva captain. Earlier, in this place, in the year 1892-93 stood strengthening titled Shadzhansky post (commander – captain of the General Staff, PA Kuznetsov). 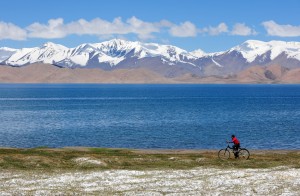 The climate is great amplitudes of temperatures: up to – 45 ° C in winter and to +15 ° C in summer. The precipitation is only 350 mm per year. Precipitation does not have a season as they fall in the summer and winter, or whether it is spring and autumn.

Mrgabsky area is famous for its animals that can not be met at the other edge of Tajikistan, this Argali (sort of sheep “Marcopolo”) and the Yaqui. In Murghab almost no orchards because of the lack of frosts and the soil can not grow fruit trees. There can be from the rare to meet some ornamental trees such as pine and poplar.

The population of the Murghab district, after the construction of the Dushanbe-Khorog-Murghab which connects Tajikistan with China on Highway # 41 has got a new impetus to trade and the improvement of social life. Murghab visit a lot of tourists and passers-by who use the services of local area residents. The main source of the villages of the Murghab district is the cattle. Other sectors of the economy can not be produced as from geographical and climatic conditions do not allow the implementation of these activities. From this part of the young people go to work in Dushanbe or abroad.

Despite the poor economic performance of the Murghab district office has 5 local banks. But the population to use modern means of communication most used services of cellular T-Cell which is very powerful for various parameters.

The district has a state unitary enterprise “Chamast” in Murghab and is engaged in mining of rubies on the field, “Snow” and 14 secondary education schools. Companies selling products in addition to the area, produced by local farms and legal entities, and develop tourist destination by organizing routes to Karakul Lake, Jashilkul, Bulunkul, trekking and hunting for tourists and extra fans.

Key indicators of the Murghab district:

Excerpts from the President of the country Emomali Rahmon speech while visiting the Murghab district of 25.07.2010g.

Weather forecast in the Murghab district: