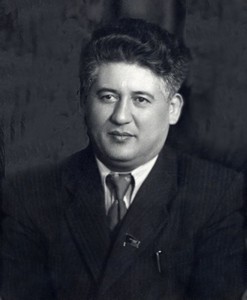 Tajik national poet and the hero – Mirzo Tursunzoda, born 19 april 1911 in the village of Karatag, Regar district, Republic of Tajikistan in the family of a blacksmith.

Mirzo Tursunzoda in the development of the culture of the Tajik people put a tremendous contribution. At one time he was a favorite of the people, and especially women. His name was on the top of political and cultural events.

Considering the contribution invested Tursunzoda, modern Tajikistan gave him the status of Hero of the Tajik people, called the national banknote 1 somoni in his honor. Along with this is also the name of his native land was renamed in honor of the poet (Tursunzoda district).

Young people and old people very well know and remember verses Tursunzade under the name “Johni Shirin in Kadar Jangam makun” repeating the words that they said something Tajik. Pamyatnaki Tursunzade found in several cities and regions of the country and in his honor called avenues and streets of the capital and some cities of Tajikistan. There is a museum named after Mirzo Tursunzade in Dushanbe and in the native village of the poet.

Mirzo Tursunzoda during his lifetime became a classic. His works have been translated into dozens of languages, critics gave flattering assessment, but the people sang the lines of his love lyrics. “I met a girl, crescent eyebrows, a mole on the cheek, and his eyes – love” – perhaps not only in Tajikistan, but throughout the Soviet Union, this song was known and loved. However, many are not even aware that these lines belong Mirzo Tursunzodaade: poems were so sincere, warm light that seemed composed of people.

The poet was born in an ordinary, poor family artisan – woodcarver; like the other boys from his native village, he helped his father, was playing in the dusty streets of his native village. His father was a hard fate: he worked in the field, when there was a terrible earthquake that killed his wife and five children. He remarried and had a son – Mirzo.

Many years later, the Mirzo, while still a boy, too, knows the bitterness of loss. His father was sent to Samarkand – carved work on the palace gate, and his mother died of the disease. Away from home, the father (Tursun) saw a terrible dream about your family and the next morning, he decided to return to her son, but the work was not yet over and it would not be allowed to go home, my father decided to flee from Samarkand.

Sleep proved prophetic: after returning to his native Karatag, he learns of the death of the wife, and his young son finds a stranger in the family …

After the return of the father immediately gave Mirzo in school at the local mosque. “The bones – our meat – your” – giving the children to school, then all parents uttered this phrase. She also repeated the father and Mirzo Tursunzoda. What does it mean, the future poet learns much later.

“Stick at the Mullah was very long, and no matter where I was sitting, took out my head” – then will tell Mirzo Tursun-Zade of his first school. But nothing could discourage him thirst for knowledge.

Once, one of his father’s classmates met Mirzo said: “Your father has deceived us all”, – says the son of the poet – Masoud Tursunzade. – I was surprised, and asked what it was a lie. He explained: “We all ran away from school and played ashichki. And your father said, they say, you play for me and I for you to learn. And what a finish my studies! “.

In those days, not all craftsmen sent their children to learn to read and write, but my father Mirzo Tursunzoda always dreamed of his son to become an educated man. Even the name “Mirzo” meant – literate, educated. The son did not disappoint expectations of his father. Once in the region came to the Soviet regime and to the children of ordinary families have opened up new possibilities, Mirzo Tursun-Zade has not failed to take advantage of them. At first, he was transferred to Dushanbe boarding school, then he entered the Pedagogical College, where he was, as one of the best students were sent to study in Tashkent, the Institute of Education.

After graduation he started his meteoric rise …

Returning from Tashkent, Mirzo TursunZoda begins his career as a journalist in the newspaper “Komsomol Tojikiston”. Once it is sent in Leninabad, lead the literary part of the Leninabad Music and Drama Theatre. He tried his hand at drama. And soon after his play “hukm” in the theater put on plays. The main role went to the young actress, beauty – Sabohathon Nazhmiddinovoy. Subsequently, she became the wife of the poet.

That was the whole story! – Recalls Masood Tursunzade. – His father was a stranger in Leninabad, it is because of Hissar. Of course, to give his daughter to him, no one wanted. Moreover, my maternal grandfather to the Soviet regime was Yishan, grandmother – his fourth wife. The whole race was against the marriage, and they have loved each other in pain. And then, my wise grandmother said to her father: “Take it, taking away and be happy.”

Mirzo Tursun-Zoda and his wife 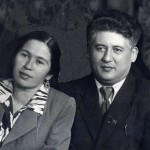 And so it happened. Young left Leninabad, Mirzo Tursun-Zoda was the famous poet and Sabohathon they lived a happy life.

They lived well, says Masood Tursunzade. Of course, as in any family, there were misunderstandings, but in general it was a strong and united union. I remember that in 1968 his father was awarded a gold medal “Hammer and Sickle”, he came home, his mother said: “You see, this is our achievement with you!” And she pinned the medal on his chest.

The family Mirzo Tursunzoda had three children: a daughter – Firuza and two sons – and Masood Parvez. They gave their lives poetry, but one way or another, each of them continues his father’s work. Firuza chose a philosophy, the youngest son of Parviz became orientalist and senior Masood – was the first educator – teaching technical subjects, and today heads the technical department of cellular communication.

Once a child Masud tried to write poems in Russian, and somehow decided to show them to his father, he looked up and said: “I’m in Russian poetry is not particularly understand, so let the one who took you to a Russian school, and gives an estimate.” But of course he was joking so. The fact that his father was always busy, and when I got the time to enroll in first grade, he was on a business trip. In school I wrote him a close friend, and wrote in a class with Russian language of instruction. So I wrote poetry in Russian. And only later he told me: “You know, son, you have more power to the exact technical sciences, and so, it is better to be a good engineer than a bad poet.” And I completely agree with him. While still writing poems for friends.

The family reigned Tursunzade good atmosphere of mutual understanding and mutual respect. Highly appreciated the freedom of man, Mirzo Tursun-Zoda and gave it to their children. He will never let their choice, whether it is the choice of profession or life partner. But the love of work trying to instill in early childhood.

Friends for Mirzo Tursun-Zoda was an important part of life. Thanks to his broad mind and noble character of the poet has been around a lot of people who idolized him and infinitely respected. The charming family house Tursunzade going the entire creative elite of the republic, and not only that: here come the most famous poets, writers and composers from all over the Soviet Union. There were also doctors, engineers, and political elite. 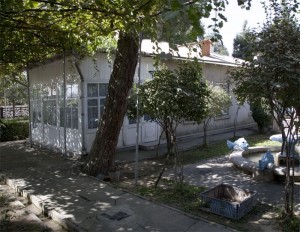 At the home of Mirzo Tursunzoda time flew by. In fact, friends meeting, which took place here, were similar to the recitals: they recited poems, sang songs, listened to music. Firuza daughter played the piano well. At the same instrument played music Andrey Babayev – the famous Azerbaijani composer who has written music for many popular songs, including the song “I met a girl”, as well as well-known Tajik composer – Ziedullo Shahidi, with which Mirzo Tursunzoda created a lot of great songs .

Friends for the father often were the first listeners. His new works he exhibited in their court. And always listened attentively to every review.

However, real friends were mostly positive, so the most important critic of Mirzo Tursunzoda he was himself.

If all the works that he wrote for his life, came to light, then it would have been dozens of volumes. But he has only two volumes of poems. He gave the reader only what he thought was best.

Best he really chose only by himself. In the evening, when the family went to bed, he went into his cozy office and asked me to bring an empty ashtray and empty the wastebasket. The whole night was hard work, and in the morning, when the wife was part of the study, an ashtray on the table was filled with cigarette butts, and basket – torn sheets with sprawling handwriting of the poet. 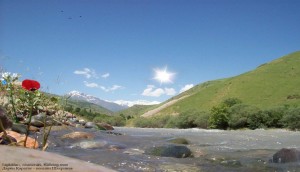 The inspiration for their works Mirzo Tursun-Zade drew in Tajik nature, in the Tajik people, and yet he has traveled all over the world. The poet traveled to many countries. In the 40s he traveled to India. This country, its people, their way of life and customs so shocked Mirzo Tursun-Zade, a cycle of poems that soon was created “Indian Ballad”. For them it was presented to the Stalin Prize – the highest award of the time. But the commission, which considered his candidacy in doubt: the poet is too young for such recognition. Then an argument broke Stalin himself: “Give him the prize, he has to write more and better.” The award was given. Awarding was held in Moscow in 1948.

Of course, by the thought that his father was loved by all, – says Masood Tursunzade. – But it was not so. It was a misunderstanding, rejection; They were even persecuted. But the big men can not be otherwise. The more so because his father was a sharp temper, and he never betrayed himself. 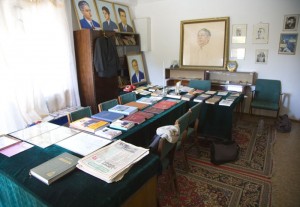 As for loyalty to Me, then Mirzo Tursunzoda, first of all, it was loyalty to their land. In the 60 th year he was invited to head the newly created Patrice Lumumba Peoples ‘Friendship University (now – the Russian Peoples’ Friendship University, ed..). From such a serious offer no one could refuse, especially since it came from Mikhail Suslov – a prominent politician of the time, but Mirzo Tursun-Zoda that proposal did not take advantage. The only reason for its refusal was the fact that the work of the upcoming Moscow. “Always there, I can not live. I have no Tajikistan – anywhere, “explained his decision poet.

Such conduct could not fail to cause, on the one hand, the admiration, the other – negative. In Mirzo Tursun-Zoda was enough enemies who all tried to annoy. It is hard for all this upset, but tried not to show. Meanwhile, the body faltered: are micro–nfarkty, sickness and disease. 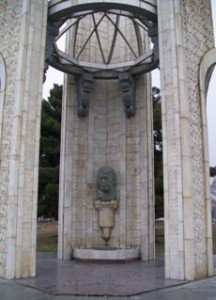 Soon Mirzo Tursun-Zade developed diabetes. Use of insulin he flatly refused: constant dependence on drugs for it seemed a kind of restraint of liberty. Doctors gave him a bunch of potent drugs, which had hoped to drown out the terrible disease. But the drugs given complication.

In serious condition Mirzo Tursun-Zoda was in intensive care, his kidneys failed. This is now the kidney transplant is not considered prohibitively difficult operation, but in the 70 years medicine has been so advanced. To save the poet, in Dushanbe from Moscow came the brilliant doctors, but it was useless after the second session of hemodialysis at the age of 66 years 24 September 1977 Mirzo Tursun-Zade died. Poet Tursunzade zaharonen in the village Luchob Dushanbe.