Kulikalon Lake – the second largest lake of Fan Mountains, located in the territory of the Republic of Tajikistan Ayni district in the western part of the Hissar mountains. In the english language its name can be translated as “Great Lake”. In general, the lake “Kouli Kalon” is actually the name of a group of lakes (6 small and one large), each of which has a separate name and most important of them yalyaetsya “Kuli Kalon” with an area of 580 square meters. km .. All of them are located at the western edge of a large Kulikalon basin at an altitude of 2832 meters above sea level. 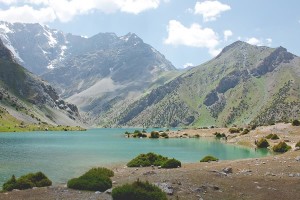 Usually here in the summer heat, growing juniper forest, lake water is fresh and warm (from +5 to +15 degrees Celsius), and is suitable for swimming. On Kulikalon and close on the neighboring lakes Kulikalon depression almost always have people standing tent. The northern shore of Lake Kulikalon capriciously cut up, go deep into the coast of secluded coves, rocky headlands share bays, winding strait separates the big green flat island, jutting far into the lake. To the south end Kulikalon narrows close to him looms the rocky slopes of the lateral spurs, and then get up the black walls of the Fan West Ridge, on the crest of which shine white-green ice.

Kulikalon is a living lake because it has the inflow and outflow of water. It represents the last link in the chain of lakes Kulikalon basin. They bring water river that flows into the lake on the north shore. The second river flows into the lake at its southern end. Stoke from an underground lake, going through the thickness of the moraine. Riddled moraine, the light appears Artuch River (also the name of the village). Not so long ago, after the lake was released marinka fry, and they settled down here it was the dwelling fish. In winter the lake freezes and turns around into the icy ground. From the point of view of science and the history of the lake appeared naturally.

Video Fan and including Kulikalon Lakes

The distance from Lake “Kulikalon” to the capital of Tajikistan  – Dushanbe city is about 200 km. on the road. To get to the lake can be a car and not reaching 4.2 km in the limbs. walk as there is the road to the lake vicinity. The route towards the lake is possible through the Kosh village and then to the village of the homeland of the poet Rudaki Abuabdulloi (Pandzhrudak) and the rest of the route in the southeastern part of the highlands at a distance of 15 km.

Location Lake Kulikalon on the map

The geographical coordinates of Lake “Kulikalon”: 39 ° 15’14 “north latitude and 68 ° 10’15” east longitude. Other small lakes of natural mountainous Lake pit is Dyushah and turbid lake. Near the lake (3.5 km.) Has Artuch camp for tourists. 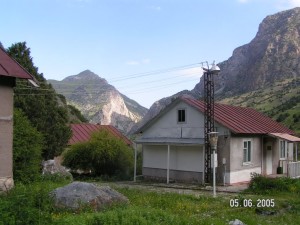 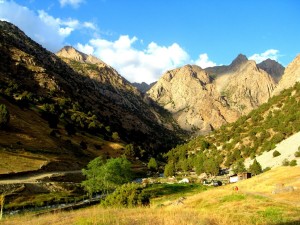 Camp at the Lake