The secret of cooking khanum: Today, in any eastern market, you can meet girls who sell food. And it will not be fast food, harmful to the human body, but home-made food like samsa, yummies, cakes and khanum. Khanum is well-deservedly called the culinary masterpiece of the east, it is very simple in preparation, so even the beginning hostess will cope with this task, all the more, on the vast expanses of the World Wide Web one can find a khanum recipe with a step-by-step photo. 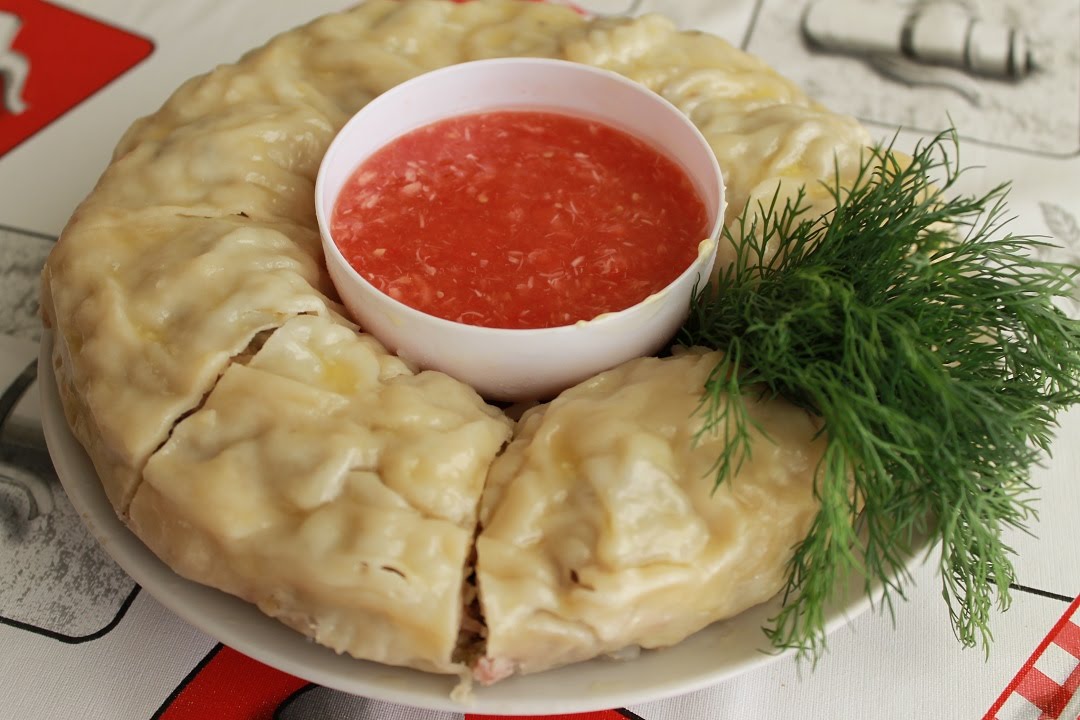 This is quite simple in the preparation of the dish refers to the national cuisine of Uzbekistan. Today, there are a large number of recipes for khanum, just like a large number of variants of the name: khanum, hunan, hanim, etc. by its composition it has much in common with the mantas known to us, the difference is that the mantles are molded separately, while the khanum is prepared entirely and has the form of a roll.

The well-known legend about the khanum says that one woman, after meeting her husband after a very long absence, very much wanted to please him: cook delicious food, give him drink and put him to bed. That’s why she decided to cook one impressive pelmeni with meat stuffing, and to make it rich, she added potatoes there, seasoned with spices and served her beloved wife, while smiling sweetly. Legend to say that everything went quickly and easily, the husband was very pleased that his wife came up with such a meal for him. It is rumored that the name of the wife was Khanum, it was from here that the name of this beautiful culinary masterpiece began.

If you want to cook khanum, we need a dough, a filling, and also utensils, where it can be cooked. Cook them in a special mantovarka. For these purposes, a steamer is also suitable. Preparation of the dough takes place according to the same recipe as for manti or dumplings – you will need water, salt, eggs and flour. The field of preparation of the dough is preferably covered with a napkin, it should be infused for about sixty minutes.

The choice of the filling for the indicated dish resembles the selection of the filling for pizza – you can use everything that is available in your refrigerator. As a filling is often used meat with carrots, onions, cabbage, sometimes one meat is used. Recently, khanum with vegetables is very popular. It is important to cut them finely, and it’s better to even rub on grater.

Then everything depends on your taste and wishes. You can use a variety of combinations, for example, successfully combine pumpkin and onions, potatoes and onions, peppers and eggplant. The stuffing from vegetables can be used both raw and lightly fried. Some housewives prepare khana, in which the filling is absent altogether. In this situation, he is simply smeared with sour cream, and then wrapped roll.

As for the recipe of khanum with meat, it will be necessary for him to make minced meat or simply cut the meat into small pieces. To make the filling seem more juicy, you can add a little fat and fat. Potatoes or onions are passed through a meat grinder or rubbed on a grater. Sometimes the potatoes are cut into small pieces. It is also important to add the right amount of salt, pepper and various spices.

Hanuma’s recipe is such that the dough needs to be divided into parts and each of them is rolled into a thin layer. The smaller the thickness of the dough, the more tasty your khanum will be. On the rolled out layer you need to lay out the filling and roll the roll from the dough. From the roll, a ring is created, it needs to be cooked from forty-five to sixty minutes, everything depends on the type of filling. Mantovarku or steamer it is important not to forget to grease with oil, otherwise the roll will simply begin to stick. The top part of the roll should be sprinkled with liquid.

How to be if you do not have a steamer or a mantovarka? You will be able to get a pot in this business, as well as a colander. Khanum must be put in a colander, put on a pot, where the boiling water is, after which you can cover it with a lid. At first glance, this dish may seem too simple, but in reality it is extremely satisfying and tasty, especially if it is cooked at home.

Ready-made food must be divided into pieces and put in the form of a slide on a flat plate, from above it can be poured with sauce and sprinkled with finely chopped greens. In most cases, a sauce made of sour cream or tomato is prepared for khanum. For the first it is necessary to fry onions, carrots until the appearance of a crust of golden color, you can also add tomatoes or tomato paste, stew for five to ten minutes. In the sauce of sour cream add pepper and small garlic.

Hanuma’s recipe with a step-by-step photo is as follows:

The first step is the preparation of the dough. For a dish like khanum, the dough will make very simply. In a deep bowl you need to mix flour, egg, cold water, salt and vegetable oil. Mixing of ingredients is done with a fork, and then simply by hand on a dry table top, which is sprinkled with flour. The resulting product should be divided into two halves and sent for thirty minutes in the refrigerator, so that the dough can brew.

During this time, you need to prepare the filling. If you plan to use the most common stuffing without different additives, then you just need to cook the meat. The piece of pulp that you have chosen, it is necessary to wash, dry and grind. Often used for chanuma minced minced meat. Onions need to be cleaned and finely cut with a knife or in a blender. Onion should be mixed with finely chopped meat, add salt and ground pepper. Ingredients should be mixed in such a way that the mass was homogeneous and there were no lumps in it.

One ball of dough should be rolled into a thin circle. On its surface, making small indentations along the edges, the prepared filling is laid out. Over the entire area of ​​the roll evenly spread out also pieces of butter.

After that, the dough should be wrapped in a roll and tightly bound with edges, so that during the cooking the khanum did not fall apart. The same actions should be repeated with the second part of the test, as well as with the stuffing that remained.

The base of the steamer should be greased with vegetable oil and put on it a prepared roll.

Cooking rolls with medium heat until ready, as a rule, it takes from thirty to forty minutes.

Many housewives are used to cooking khaknum in the oven. So, if you enter the phrase “khanum recipe in the oven” in the search bar, you will get a lot of different results. The whole point is that baking and cooking khanum in the oven is much easier than in a double boiler. In addition, the taste of the dish will differ from the traditional, at least, because of the test you can get a delicious crust. In addition, in the middle of the roll meat and vegetables will be perfectly baked and can soak up the aroma of each other

In Uzbekistan, it is customary to sprinkle onions with chanum. To do this, it is very thinly cut into small rings and pre-marinated, spiced with a spoonful of vinegar or lemon juice, adding salt and sugar to taste. Remember that the longer your onion will be pickled, the less bitter it will turn out to be, it will get a piquant, sweet taste.