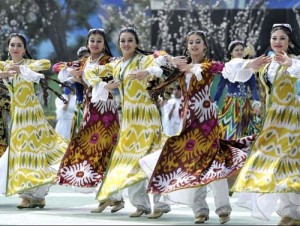 There are 10 official holidaysn in Uzbekistan,  which celebrate and solemnly declared output -nerabochimi days.

The most favorite holiday of the Uzbekistan people are considered to be religious holidays such as the “Ramadan” and “Qurban” and calendar holidays “New Year” and “Navruz” accompanying fluffy fun.

In every holiday the head of state speaks a congratulatory speech to the people through the mass media such as television and radio. During the holidays the national flag is raised in Uzbekistan, composed concerts, festivals, sports events and enhanced security control.

Note: The days of Muslim holidays such as the “Ramadan” and “Qurban” is defined in accordance with the lunar calendar, which change in the attitude of the Gregorian calendar year moving about 10 days ago.

On entering the territories of Uzbekistan along all the lands of Central Asia in Russian colony, and in particular after the 1917 revolution was started introduction of the Gregorian calendar in use of public and popular del that was the reason for the celebration of the New Year at the European customs.

Today “New Year” is widely celebrated throughout the territory of Uzbekistan, like European countries. In Uzbekistan, a symbol of the new year is a Santa Claus, as well dressed tree. At midnight from 31 December to 1 January, when hours solemnly beat 12 hours comes the long-awaited New Year. Declares 1-day weekend (1st of January). People at this time celebrate and widely mark this holiday with their family and friends behind the covered elegant table. Also, traditionally portrayed each other gifts and surprises.

Worth noting that the majority of Muslims living in Uzbekistan offer unsubscribe from celebrating the New Year on January 1, as this is not peculiar to Islam and to the people.

International Women’s Day – also introduced by the Russian people in Uzbekistan after the entry of the Soviet Union. In Uzbekistan, people celebrate this holiday as a celebration of love, goodness and beauty. On this day men ceremoniously presented to their mothers, wives and daughters, colleagues (female), flowers and gifts with sincere wishes.

The oldest folk festival “Navruz” in translation from Persian Navruz means “New Day”. Uzbek people for Navruz was celebrated even in the kingdom of the Persians in Central Asia (3000 years ago). Navruz is celebrated on March 21, it is considered the beginning of the new year. This festival is celebrated at the beginning of spring, when all the plants and trees blossom and get a new spring look. On the eve of this holiday many Uzbek family prepare special savory food such as Sumalak, Halim, Sambusa and others. These Uzbek dishes contain many vitamin substances which are useful to the human body.

With the acquisition of the country’s independence revived the ancient customs and traditions of the Uzbek people, the holiday Navruz also has been restored, and celebrating has got new scope and depth. It became a national holiday of friendship, unity and brotherhood of all peoples. The bright theatrical performances revealed philosophical and poetic reflection of Navruz, its role in national history. Currently, Navruz is celebrated every year for 3-4 days (March 21-24).

May 9 Uzbekistan marks Day of Memory and Honor, holiday light sadness, reverent respect, pride and deep gratitude. Uzbekistan contributed to the victory over fascism. Thousands of Uzbeks worked in the rear, the republics of hosting refugees evacuated enterprises providing front.

During the years of World War II, Uzbekistan has lost more than 450,000 of its sons. 9 May all the people of the country, as millions of people around the world congratulate the veterans: in all towns festive concerts, food, charity events, awarding.

And of course, in this day people go to the memorials, the Pantheon with an eternal flame, monument and lay flowers and a minute of silence the memory of the heroes. In Tashkent, the center of the celebrations is the Independence Square, which is the Walk of Fame and memory. On both sides of the avenue are granite stele on which are engraved the names of all Uzbeks who died on the fronts of World War II. And as if mourning their sons forever “stagnation” in bronze Grieving Mother – a monument symbolizing the homeland, native land.

The main national and state holiday of the Republic of Uzbekistan – is Independence Day. This holiday is celebrated annually on the 1st September, is ceremonial and colorful since 1991 with the collapse of the Soviet Union.

1-st October (Day of the Teacher)

Every year on October 1 since 1993, the year in Uzbekistan celebrated the Day of Teachers and Instructors. Deep respect for the teacher has taken roots in our territory during old times. “Domullo”, “Muallim”, “Ustoz” – these words during many centuries with gratitude and respect the pupils received from the teachers not only knowledge on subject matters, but also manuals about the valid attitude to people, love to the Motherland, high morals and spirituality.
Students of schools and educational institutions deeply esteem all those who have given them the first vital knowledge. On this day, students with gratitude give flowers and gifts, make confession for their hard work in the path of life.

8 DECEMBER DAY OF THE CONSTITUTION

This holiday is one of the greatest and most dolgozhitelnyh holidays Uzbek people after the Arabs took possession of Central Asia in the VII century. This holiday is known as Ruza Hayit, it coincides with the 9th month (Hidjriy) on a Muslim calendar. This holiday includes religious practice as Ruza which lasts 30 days and is considered a rite of spiritual and moral purification.

After the last day of Eid al (approximately 31 days) begins the holiday, which lasts 1 day- Ramazan Hait. The first day of a holiday «Ramadan Hayit» is considered not working day, and all establishments have a vocation in this holiday.

Religious holiday Kurban Hait is also one of the greatest events in Uzbekistan, which is celebrated by Muslims. The sources of this holiday are ancient stories that are associated with the prophet Ibrahim, who in honor of his faith wanted to sacrifice “Allah” of his own son, but his actions have stopped kind spirits and instead told him to sacrifice other animals such as sheep, camels and so on. d. From this moment all Moslems began to sacrifice animals in these holidays. The holiday lasts for three days (officially 1 day) and these days all Moslems celebrate this holiday with the family with family and friends. Especially in these holidays people visit their relatives and friends, as well as sick and in need of assistance. The first day of the holiday “Kurban Hayit» is considered not working day, and all establishments have a vocation in this holiday.