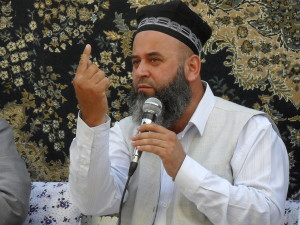 Hoji Mirzo - one of the most famous religious figures in the Islamic world in the space of Tajikistan, born on September 22, 1967 in the town of Kulyab, Tajikistan.

Biography: Full name – Ibromov Mirzodzhon in 1974 went to learn in secondary school №9 Kulyab and graduated from it in 1984. Simultaneously, he studied courses in accounting and was an accountant profession. In 1985 he was drafted to serve in the Armed Forces of the USSR, and after serving a year in Kiev (Ukraine) was redirected to eliminate the consequences of nuclear accidents Stations Electra “Chernobl”.

He returned in 1987 to his homeland (Tajikistan) and was hired as an accountant in Kulob catering. In 1990 he enrolled at the Islamic Institute named after Imam Tirmizi (now the Islamic Institute named after Abu Hanifa), graduated from the university in 1995. In 1994 and 1995 he made haj and became with title “Hoji”. In 1995 he enrolled in Islamabad Faisal University, where in 1999 he graduated from the “Methodology of religion.” From 1999 until early 2011 was the imam of the mosque-Khatib “Hiloli Ahmar,” the city of Kulob. Currently, officially unemployed. He lives in the town of Kulyab.

He knows English and Arabic lanquages. In the eighties of the twentieth century, he studied with Domullo Sharifi Kulob (Same Odinazoda).

Hoji Mirzo among the population of Tajikistan is one of the greatest theologians, as well as the distinguished representative of the Islamic world on the social events of the country. Its popularity and contributed to the spread of Islamic precepts in the Tajik language is very important for people whose daily looking for and listen to Internet networks, as well as in markets and other public places.

Hoji Mirzo for 2010-2016 years, the Internet has been and continues to be the most famous, popular person who preaches – will bring to the attention of the people of the Islamic commandments (taj Neihe munkar – Amri Maruf) according to the fiqh of Imam Azam. After Hoji Mirzo on the Internet more well-known Tajik theologians are Eshoni Nuriddindzhon which is 2 to 3 times less popular.

Words and expressions Hoji Mirzo for the people of Tajikistan is very important and necessary in connection with which he often write letters and interview for various known media including Radio Ozodi, newspaper Asia Plus, Press Tj, etc.