Football in Tajikistan is one of the leading sports after which more popular sport is considered “Gushtin” and then “Buzkashi” and others. Tajikistan in the FIFA world rankings occupies a good position (7/10). Annual consumption in Tajikistan Football is more ten million somoni, and about half of them through FFT (Football Federation of Tajikistan). 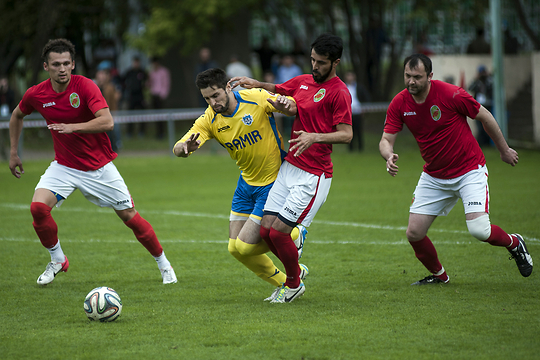 In Tajikistan, officially, there are more than ten football teams and the most popular – titled to champion status are as follows:

As you can see in the football teams in the Champions list Tajikistan is mainly teams from Dushanbe (5-Clubs), and it is caused by the financial support. For example since Agroinvestbank funded in the amount of 1 million. Somoni each year (2012-2013) football team Ravshan they became champions in this year. Another example since RT Aluminum plant financed FC “Regartadaz” then her luck to smile more.

While the football team cities of the country is the main champions but their players came from outside-urban population. One notable factor is that the residents of the northern part of Tajikistan (Sughd region) are very backward in football.

Football ranking of Tajikistan in the world 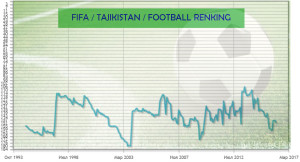 According to estimates by FIFA (International Football Federation) is the most the highest position among the 200 countries of the world, the Republic of Tajikistan in its history, received in July 2013 reaching the 106th position with 314 points mi. As you can see in this chart shows the dynamics of achieving the Tajik football in world sport. According to these data, the worst performance in the Tajik football was in 2004, the code of its rating dropped to 1979th position.

Thus the state of Tajik football can say that, given the economic difficulties and mountainous terrain in the country is still a good performance in the world rankings and the 10-point scale, it occupies the 7 th place in 2016 to be exact 150 th (end March 2016) . The worst football team in Tajikistan in the world ranking is Team India, Malaysia, Indonesia and several other countries. Better Tajikistan considered such countries football teams on the FIFA rankings as Kyrgyzstan, Lithuania, Georgia, Armenia, Azerbaijan, Uzbekistan, Mali and many other states. Word of Tajikistan among the countries of the former Soviet Union takes the position will follow.

Achieving Tajiks in football on the world stage

According to estimates, the most expensive foreign players in Tajikistan are: Farhod Vosiev ($ 200 thousand.), Nuriddin Davronov ($ 150 thousand.) and Khurshed Makhmudov ($ 100 thousand.)

Management and coordination of the Tajik Football

Football, among other sports in Tajikistan is coordinated by the Football Federation of Tajikistan. (Taj Federosiyuni Football Tojikiston.) – The governing body of football and management in Tajikistan. Headquartered in Dushanbe. It organizes the national championship, the national Cup and Super Cup, national team, support, development and promotion of football in the entire country. Federation President Rustam Emomali is (the son of the president of the Republic of Tatarstan).
The Federation was founded in 1936 in what was then the Tajik SSR as a department of the Football Federation of the USSR. After independence, Tajikistan, the Federation was revived in 1994 and in the same year was admitted to the FIFA and AFC..

Soccer has penetrated into the territory of Tajikistan in the early XX century. Then they were created football team in Dushanbe and Khujand, between which have been started long distance matches. Tajik SSR Championship began play out since 1937, and the Tajik SSR Cup draw has been held later.

After the collapse of the Soviet Union and the independence of Tajikistan, it was organized by the team of the new convocation of Tajikistan. His first team matches held in 1992. The first game was the Tajikistan team match against Uzbekistan (2: 2), in the framework of the Central Asian Cup in 1992, initiated by FIFA. These matches are officially registered by FIFA on the basis of the fact that the team was allowed to Tajikistan since 1992 to participate in the tournament, held under the auspices of FIFA. At the draw of the tournament in the league format, the national team after the second round of Tajikistan refused to participate in the tournament due to financial difficulties. In 1993, the team has not conducted a single match because of the height of the civil war in Tajikistan, and financial difficulties. In 1994, Tajikistan had been officially adopted in the AFC and FIFA. In 1995, the team also conducted a single match. During the 1990s, the team performed not on a regular basis due to civil war and a lack of finance.

In 1996, the team has played only two matches in the qualifying for the Asian Cup 1996 qualifier against Uzbekistan. The first match was held in Dushanbe ended with a crushing score of 4: 0 in favor of the national team of Tajikistan, and the second match in Tashkent, Uzbekistan national team also defeated Tajikistan with a score of 5: 0, and thus the national team of Tajikistan was unable to get a ticket to the Asian Cup 1996 which was held in the United Arab Emirates . In 1997-1999 the team played 15 matches, of which won in 7 matches.

Tajikistan’s national team failed in the qualifying tournament for the 2018 FIFA World Cup taking place in 4 «B» group, and therefore the entire coaching staff headed by Mubin Ergashev was dismissed. Thus, Tajikistan is until 2018 did not take part at least once in the international football games such as FIFA (Mundial) and AFC (Asian).

Coach of the football team of the RT

In Tajikistan the space in almost every village, district, cities there are stadiums and the biggest ones are: