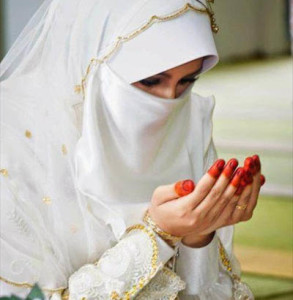 Qunoot (Qunut) is a supplication type of prayer made while standing in Islam. For example, it is sunnah (recommended) to supplicate with qunut in the witr prayer during the entire year.

“Qunut” (Arabic: القنوت‎; also transliterated Qunoot) literally means “being obedient” or “the act of standing” in Classical Arabic. The word Dua is Arabic for supplication, so the longer phrase Dua Qunut is sometimes used. Al-Qunoot has many linguistic meanings, such as humility, obedience and devotion. However, it is more understood to be a special du’a which is recited during the prayer.

Transliteration: “Allaahumma inna nasta’eenuka wa nu’minu bika, wa natawakkalu ‘alayka wa nuthni ‘alayka al-khayr, wa laa nakfuruka. Allaahumma iyyaaka na’budu wa laka nusalli wa nasjudu, wa ilayka nas’aa wa nahfid. Narju rahmataka wa nakhsha ‘adhaabaka, inna ‘adhaabaka al-jadd bil kuffaari mulhaq.
Translation: O Allaah, verily we seek Your help, we believe in You, we put our trust in You and we praise You and we are not ungrateful to You. O Allaah, You alone we worship and to You we pray and prostrate, for Your sake we strive. We hope for Your mercy and fear Your punishment, for Your punishment will certainly reach the disbelievers. O Allaah, punish the infidels of the People of the Book who are preventing others from following Your way

Video and soud of Qunoot (Qunut)

Following article that is offered to your attention is about referring to Allah with Qunoot (dua). What does this dua represent? Where does it stand among other prayers? What are the rules regarding reciting dua Qunoot? What necessarily should be done if someone wants to get the answer to their prayer? It is extremely essential to know all rules according performing dua Qunoot (and generally speaking any other prayer) otherwise it can be viewed as a sin. Answers to listed above questions and more can be found in this article.

The word «Qunoot» refers to special supplications made in the Witr prayer. It is extremely essential to know how to perform dua Qunoot (otherwise it can be viewed  as a sin). Depending upon the type of Qunut prayer it may be done before or after ruku (bowing down; essential part of prayer). Dua Qunut is also a common phrase as the word Dua is Arabic for supplication. Qunut has variety of meanings like obedience, humility and devotion.

There is a complex ritual in Islam. According to Muslim scholars believers should not only believe in one God, in the Prophet Muhammad and other prophets divine missions, in the existence of angels and devils, the eternity of the Qur’an, heaven and hell, the resurrection of the dead and the Last Day, and etc.), but also to make five times obligatory daily prayer, pay the religious tax, observe fasts and feasts, to undertake pilgrimage and perform other rituals and customs.

Qunoot was recorded by Ahmad, Muhammad ibn `Isa at-Tirmidhi, and Abu Dawood that Hasan ibn Ali got the prayer from Muhammad. Usually Muhammad repeated Du’a al-Qunoot in several prayers among which are Salat al-Fajr and Witr. Qunoot was traditionally performed in the last Rak’ah of the Salah after Ruku with the words «Sami’Allahu limn hamidah» (Allah listens to those who praise him). After which Muhammad would raise his hands or put them across navel or chest and supplicate the Qunoot. The prayer was completed after Sujud (prostration to Allah). Although nowadays Qunoot is not a very common Sunnah among Muslims.

Important to notice that there are several types (different narrations) of Dua Qunut:

Qunut Nazilah differs from Qunut e Witr. Qunut e Nazilah is recited in case of disaster, misfortune or grief in each of the mandatory prayers up until the trouble has passed. So Qunut Nazilah is specific to the certain situation. Qunut Nazilah was recited by the prophet and by the sahabahs.

Sahabah is a Muhammad’s companion, a person who met him and believed in him (became a Muslim) till the death.

As follows from information above Muhammad recited specific dua’s and wordings at specific situations. It should be added that such dua is not restricted and a prayer can make any dua during the qunoot nazilah.

Qunut Nazilah should be recited after standing up after ruku in the last rakah. The Muslim got in trouble or disaster situation should recite it in all obligatory prayers, until this grief (naazilah) passes. Also it is prescribed not to mention other things in the du’a and if the concrete disaster, misfortune or grief passes away, this Qunut should be recited no longer in the prayers by the Imam.

It is always preferred in Islam to choose others above yourself, so prayer should make dua for himself last, only after he has asked Allah to help others.

Qunoot e witr is recited in the last rakah of Witr prayer. Witr (Arabic: وتر) is an Islamic prayer which is performed at night after isha’a (night-time prayer) or before fajr (dawn prayer).

It is better for Imam to lower the voice (in upright standing posture called Qaumah) when reciting Dua Qunut. It is noted that in case woman recites this Du’aa she should do it in a soft voice.

There is a common question about saying «Ameen’» while reciting Du’aa’ al-Qunoot. Is it obligatory to say «Ameen’»? No, it is not. Although the prayer can repeat it after the Imam if he says it loudly.

Raising the hands during Witr prayer

It is mentioned that ‘Umar and Ibn ‘Abbas used to raise hands during the prayer. In du’aa’ of supplication traditionally there is a need to raise hands high. Du’aa in Witr prayer is not a supplication du’aa’ so the hands should be raised not higher than prayer’s chest. It is a du’aa’ of hope that’s why the prayer should place his hands together like he is begging heaven for something.

Before or after ruku

When should Dua Qunoot be performed? There are two opinions regarding this question. Some claims that it should be recited before bowing and others are certain that it should only be done after the ruku.

Some fuqaha (who are also the scholars of hadith) explained that both ways are allowed because both of them are mentioned in the Sunnah. But considering the fact that performing qunoot after ruku is noted more often it is making it a more popular way. Summing up, both ways are allowed so it won’t be a mistake to recite Dua Qunoot before or after ruku.

Is it obligatory to say Dua e Qunoot in every Witr?

While praying everyone must follow the Imam when he recites Dua Qunoot, it must be done in any case even if someone disagree with this opinion. It is mandatory to follow the Imam. Even if the person does not allow the Qunoot, the prayer remains valid for them. The only distinction is whether it is a Sunnah or not.