In Dushanbe, in June 2017, a new Aquapark was opened in the name of OBSHORON right in the center of the city with huge and amazing atriations with relatively low prices. The total area of the water park is 2 hectares for the construction of which 64 million somoni (7 million USD) have been spent and is still considered the second aquapark of the capital of Tajikistan (after the Delfin Water Park) 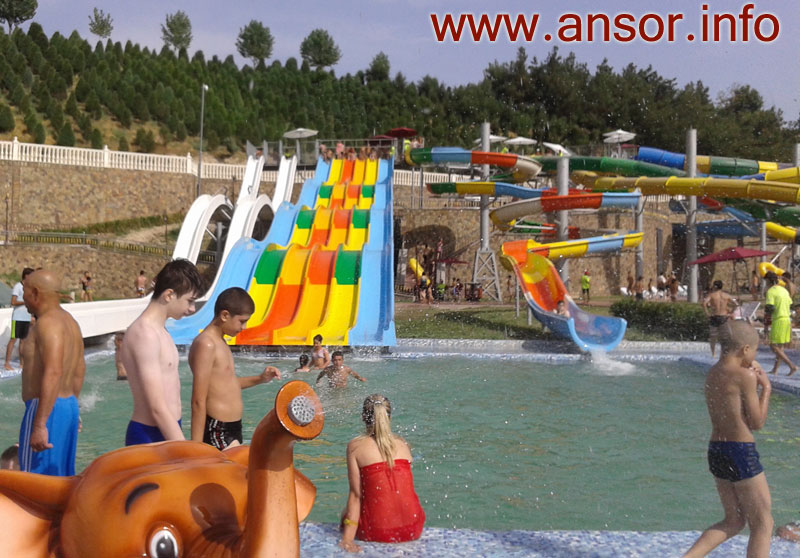 Photo Aquapark Obshoron in the city of Dushanbe Tajikistan

Conditions in the Water Park Obshoron

The connection with the fact that the water park was opened operatively in 2017 everything turned out to be organized operatively and the quality of service is not as well established as in the Dolphin Water Park. There is a lot of people, and you can see at the entrance a constant crowd of people for buying a ticket. But but but ! There is a lot of surprising that it is not possible to meet in other parts of Dushanbe, Tajikistan and even in the Aquapark “Dolphin”. Here he enjoys his advantages, in particular, his rich choice of attractions for children. 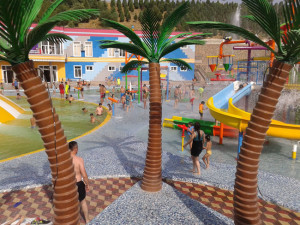 In general, at the entrance there are no rules on the board for finding and using the services of the park. At the ticket office, they write a ticket with a pen for you and prices are also not indicated in the price lists of which you could see at the box window. It’s surprising why the relevant services and other responsible persons are not aware of this.

At the entrance you are not asked to eat if you have the appropriate bathing clothes or not. And also you are not supervised when you have come and unless observe a time limit of a finding in a zone of park which is established 4 hours.

In a word about the rules, customers do not say anything yet!

By the way, everything is new, as the park was built recently and you can give 4 balls for cleanliness from 5 balls. There are dressing rooms for men separately and women separately. Shower cabins eat but most likely without warm water. The people are all hurrying and rejoicing and it is therefore impossible to find an answer to their question. No toilets are visible and little is known of where the people go in need.

The water is clean and pleasant and in different pools there is a different water temperature. Small children can even swim in the water basins whose depth is 10-15 cm and there are a lot of plastic things in them. Noise is sufficient and it makes a person rejoice like everyone else. 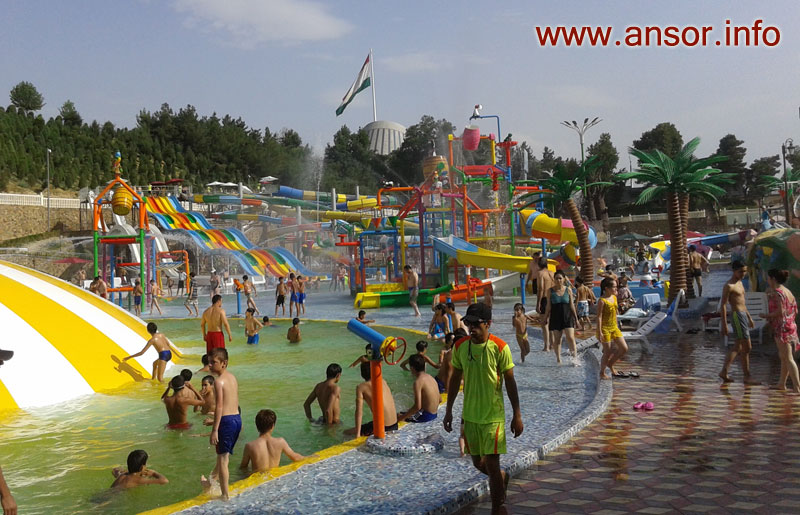 In the territory of the water park “Obshoron” there are 14 amusements where there are slides pools for children and adults with depth from 80 cm to 120 cm. This is honestly a place for entertainment and not for swimming and recreation. The sun warms well enough and when you walk in the park in the summer from 10 am to 8 pm, do not feel cold at all, since in Tajikistan the summer usually has a daytime temperature of +30 to +40 degrees Celsius.

The name of the park “Obshoron” to itself is very appropriate since in it water is constantly over and droplets of water as the fountains fly above you. Do not forget that the opening of the park was carried out by the new young City Measure “Rustami Emomali” – the son of the incumbent President of Tajikistan.

The official price that was printed and printed with also where there is consistency information from the Antimonopoly country is not the kind at the entrance. There is no breakdown of prices by day, by gender (women men) or other trim. All that is known for the following prices:

Of course in the park area there is a place for snacks where they offer a hot dish, sweets, drinks and various fruits and desserts.

If you are a resident of the city of Dushanbe, then you can get here by taxi numbers 3A, 8, 16, 18, 19, and others. In general, Obshoron is on the descent of the prospect of Ismoili Somoni prospect west of the Amphitheater. That eats next to the river Dushanbinka where there are 9 floors named Kairokum. This place is visible directly from the avenue.

The fact that a new water park Obshoron will appear in Dushanbe, became known in 2004. Then the project was started by the Turkish construction company Emek Project Limited Shirkati, however, it did not fulfill the contract, having curtailed the work in the same year, and citing force majeure. For several years the land was idle, until in 2009 the mayor’s office of Dushanbe announced a tender for the continuation of the work.

Nobody wanted to participate, and in 2013 the chairman of the city Mahmadsaid Ubaidulloev announced a repeated tender, which was won by the Italian company Preston & Barbieri. For three and a half years, she, together with the Tajik “Sohtmony Mahsus” completed the work and now the residents of Dushanbe and the guests of the Tajik capital have a new place for meetings and recreation.