International Airport of Dushanbe city (IATA: DYU, ICAO: UTDD) is an airport in capital of Tajikistan. Dushanbe Airport is a main hub for Somon Air and Tajik Air, tajik aircompanies.  A new terminal (which can serve 1.5 million passengers a year) opened on 3 September 2014. 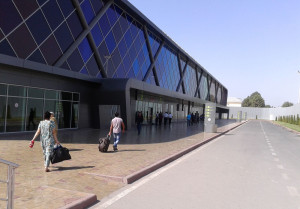 Starting from its staff, conditions and security what is the most important thing these days.  Basically most part of Tajikistan has its airport, but the biggest one is Dushanbe Internatioonal Airport. It is an international Airport from where people could fly to all parts of over the world.

First time Dushanbe Airport was found on 1924. From that moment till now it was reassembled several times. Each year  due to development of modern technology Government of Tajikistan continue to reconstruct it in order could satisfy to all the international criterions.

Government of Tajikistan doing all their best in order Airport could fulfill to all the international standards. Here  functioning new Boings, with all comfortable conditions and high qualified airhostess.

Though, to my observance it still need for some changes. First of all our Government need to think about its location. Due to international standards Airport must allocate out of the city.  Airport must allocate on the place with less  of dwelling houses. First of all it is dangerous for human health, further for discomfort and the last point which is most important for security. There could  happen any situation, so it would be better if near this place won’t be any dwelling houses.  Concerning Dushanbe Airport it occupies with buildings from all the sides. Even near the Airport situated schools and kinder garden.

The second point is about waiting halls. Sometimes passengers,  who are flying to several points of the world  after customs procedure gathered in one waiting hall. Here’s very noisy and uncomfortable. Sometimes passengers couldn’t find chairs for taking a sit and they have to stand till their flight. Most of flights are at the midnight and passengers wish to have a sit and have some rest but they don’t have such opportunities.

Nowadays we can see   such kind of deficiency issues in  Dushanbe Airport.    I am  sure  they should be  avoid  in a short period. As Tajikistan is a  very young country and we already gained great achievements since   obtaining  independence.

Contacts and address of Dushanbe Airport: