Panjakent district — one of the largest and at the same time the historical territory of the Tajik people, located in the western part of Tajikistan. The total area of Panjakent is 3.67 thousand sq. km and population of it 230 thousand (2015 y.). The administrative center of the district is the city of Penjakent which is located along the river Zarafshan. The area is also known as Penjikent, Pendzikent and Punjikat. 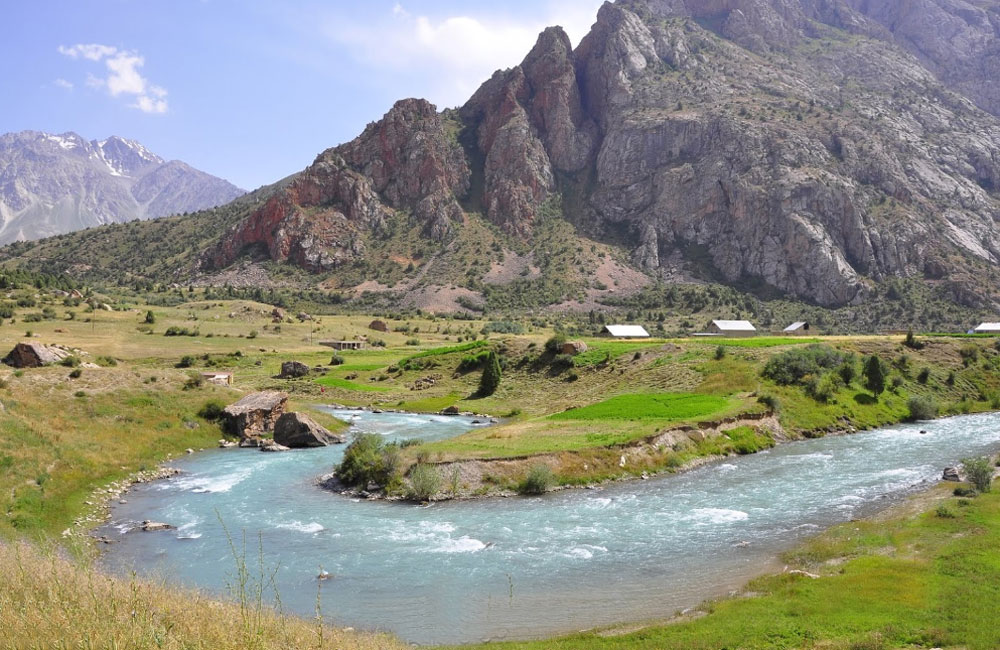 The name of the district in their native Tajik language «Panҷakent» which means «five towns» that is taken from the word «Panҷ» and «Kent». State-city, also known by the name Pindzhikent or Panjakent. Pendjikent founded November 23, 1930 and included as one of the mountainous regions of the country in subjection Sogd region of Tajikistan.

The distance from the capital city of Tajikistan — Dushanbe to the city of Penjikent is 270 kilometers from the city of Khujand Penjikent to 290 kilometers. Today Pendjikent beautiful city and it takes you a new asphalt road is reasonably safe and smooth.

Panjakent is located at an altitude of at least 850 meters above sea level in the approximate coordinates 39 ° 30’10 «north latitude and 67 ° 36’54» east longitude. Since the area is mountainous and has a flow of cool river it affects the temperature of the area. 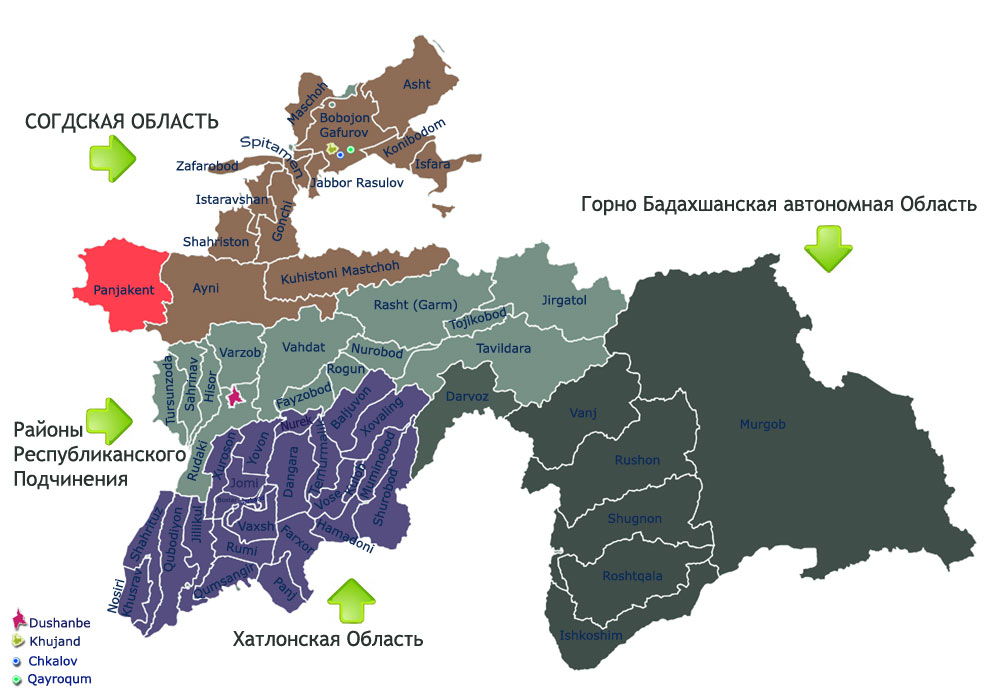 Panjakent on map of Tajikistan

In winter the temperature drops to -30 degrees Celsius, and therefore in this region do not usually grow such trees like persimmon, fig and pomegranate. In the summer the weather is hot and the air temperature is heated to 34 degrees to aim. Precipitation per year is 400-500 mm.

Panjakent in northern, western and southern borders with the Jizzakh, Samarkand, Kashkadarya and Surkhandarya region of Uzbekistan, in the east — Aini district Sogd region of Tajikistan. The total area of irrigated land Pendjikent assigns 21 thousand. And 340 thousand hectares. Hectares of rain-fed land. 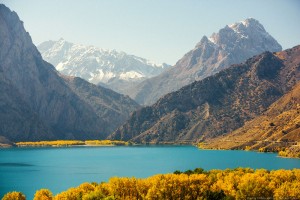 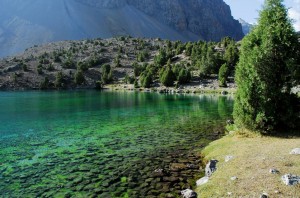 On the territory of Panjakent in Tajikistan has beautiful lakes such as Lake «Iskanderkul» Lake «Aloudin» and Lake «Haftkul» are known worldwide for its unique beauty, and here’s why every year thousands of tourists come from Europe and other countries as a tourist.

The highest point above sea level in the territory of Penjikent located near the lake «Kuli Kalon» which is 5472 meters.

The most part of the inhabitants of Penjikent are Tajiks are allocated distinctive dialect of communication. Residents Panjakent in Tajikistan tend to call Pendzhikenttsami who are considered by people with high culture in the field of poetry and the fact for this can be called on that in this area was born founder of Tajik poetry Abuabdulloi Rudaki, the great modern poet Loic Sherali, the famous Soviet and modern Tajik singer Afzalsho Shodiev and the most modern country singer Nigina Amonqulova.

Based on the fact that historically the people Pendjikent skillfully cope in poetry, music, and writing a variety of literary materials, they informally given the nickname «writer.»

That is, if someone from the residents of the northern part of the country has written his name-calling «Penzhikenttsom» and laugh at him. This buffoon appeared mainly among residents of the city of Khujand Penjikent envious of the population and do not wish that they were superior to them in the field of culture.

Surely you this news Pendjikent).

Ancient Penjikent was a small but thriving town of Sogdians in pre-Islamic Central Asia. He was known as Panchakant. The town was mentioned in history in the Iranian Achaemenid dynasty in the V century.

The ancient city of Penjikent (V-VIII centuries. BC. E.)

Penjikent was seized 329 BC by the Greeks, 722 Arabs, Mongols in 1213 and 1868 Russian. Today Pendjikent enters fully into the Tajik State and has a unique way of traveling to the city of Sogd and Dushanbe as the Republic of Uzbekistan closed the border that bind Samarkand and Penjikent.

Phones of government organisation of Penjikent 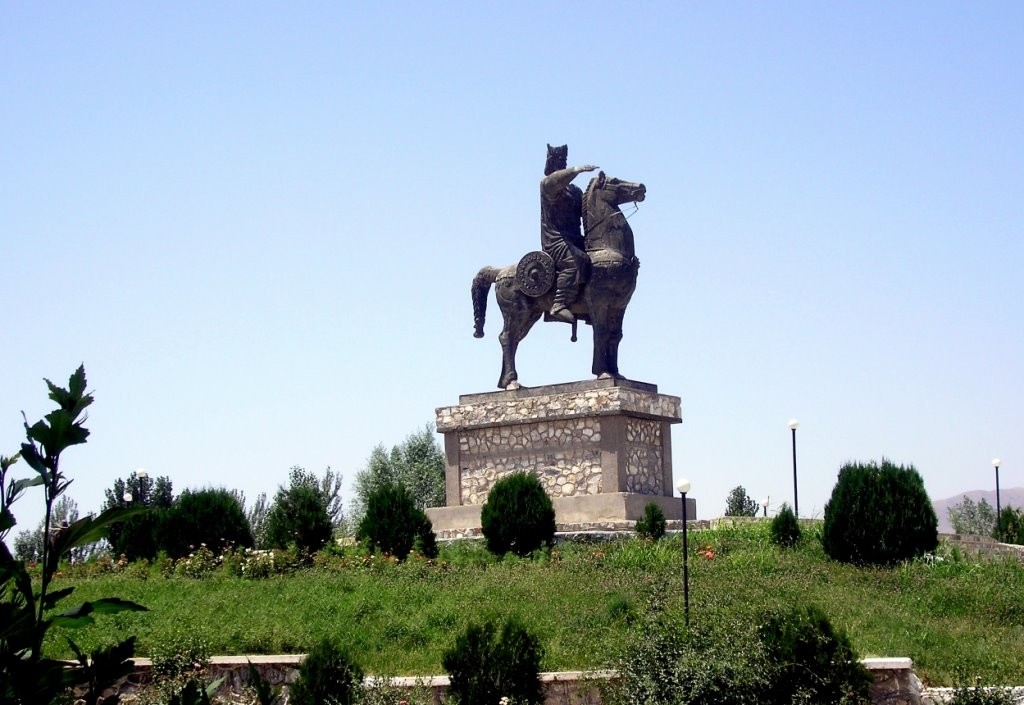