Ziyarat (Ziyarat) Lake – which translates from the Tajik language as the “Visit” or “Pilgrimage,” is one of the smallest and alpine lakes of Tajikistan is located in the western part of the Hissar Ridge country in the southeastern part of Penjikent district at an altitude of 2812 meters above the sea Ziyorat pass. The total area of Lake Ziyorat is 8.1 square kilometers and is implied by a system of 4 small lakes located in a mountain pit interconnected aboveground sewage. 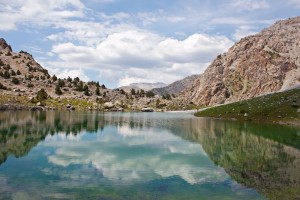 To the east of Lake Ziyarat located other system Kulik lake called Kalon distance which is approximately 2.8 km. and shares great mountain. Nature around the lake Ziyarat is not very rich in flora and rarely seen Archy trees and some greenery. The water temperature in the lake to swim in cold and it can sense people with hardened body.

Foreign tourists visit this place sometimes. Ziera living lake and its inflow and outflow constant. Its water is mainly replenished by the surrounding crystal-clear ice. But the flow of water after the creek (1.5 km.) Is poured into the Lake Chukurak which is lower in the pass.

Distance from Lake Ziyorat to the capital of Tajikistan – Dushanbe city is about 212 km. on the road. The route towards the lake is possible through the Kosh village and then to the village of the homeland of the poet Rudaki Abuabdulloi (Pandzhrudak) Artuch and the rest of the route in the southern part of the highlands at a distance of 16 km.

The geographical coordinates of Lake “Ziyorat”: 39 ° 14’48 “north latitude and 68 ° 08’15” east longitude. Other nearby small lake of natural mountainous pit is located north of Lake Chukurak. 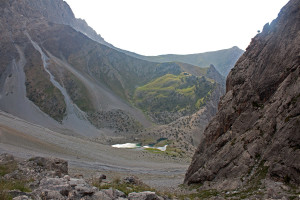 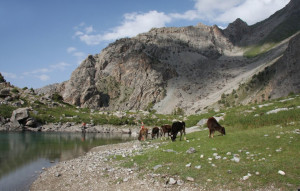 That’s what tourists say about this place: Ziyorat flows from the lake begins at the small and middle scree slope to about 25-30 °, the trail is nowhere in sight. To the left while moving along the edge of the lift shaft are 3 moraine. In the middle of the climb is steep section with a small mobile scree, and then begins flattening. Only here it becomes visible to the saddle of the pass.
Bypass area with sypuhoy can snuggling closer to the left edge of the direction of travel, but in this place in the rain with snow, located just above the flattening on, rained stones.

If just a little up the moraine shaft, it becomes a grassy slope. Travers to the left on the hill go to the saddle. Saddle Pass a long grassy and quite cozy, in the middle of the trail passes, there is a place for the tent. In the center of the saddle is round. The descent towards Kulikalon lakes goes through a grassy slope with talus and special difficulty is not. Across the slope a lot of goat trails, which is quite convenient to go down. On the descent a beautiful view to the north-east of the valley with lakes