Hotel “Shumon” invites you to Dushanbe – the heart of Tajikistan! Dushanbe is a garden city with wide streets and squares, beautiful shady parks and alleys, cool artificial lakes and singing fountains. The history of the city begins with a village called Dushanbe, the earliest information about which dates from the first quarter of the seventeenth century Initially, it was a small settlement that arose at the crossroads of trade routes, known for the fact that on Mondays there was a large bazaar. Dushanbe, translated from Tajik, means “Monday”. 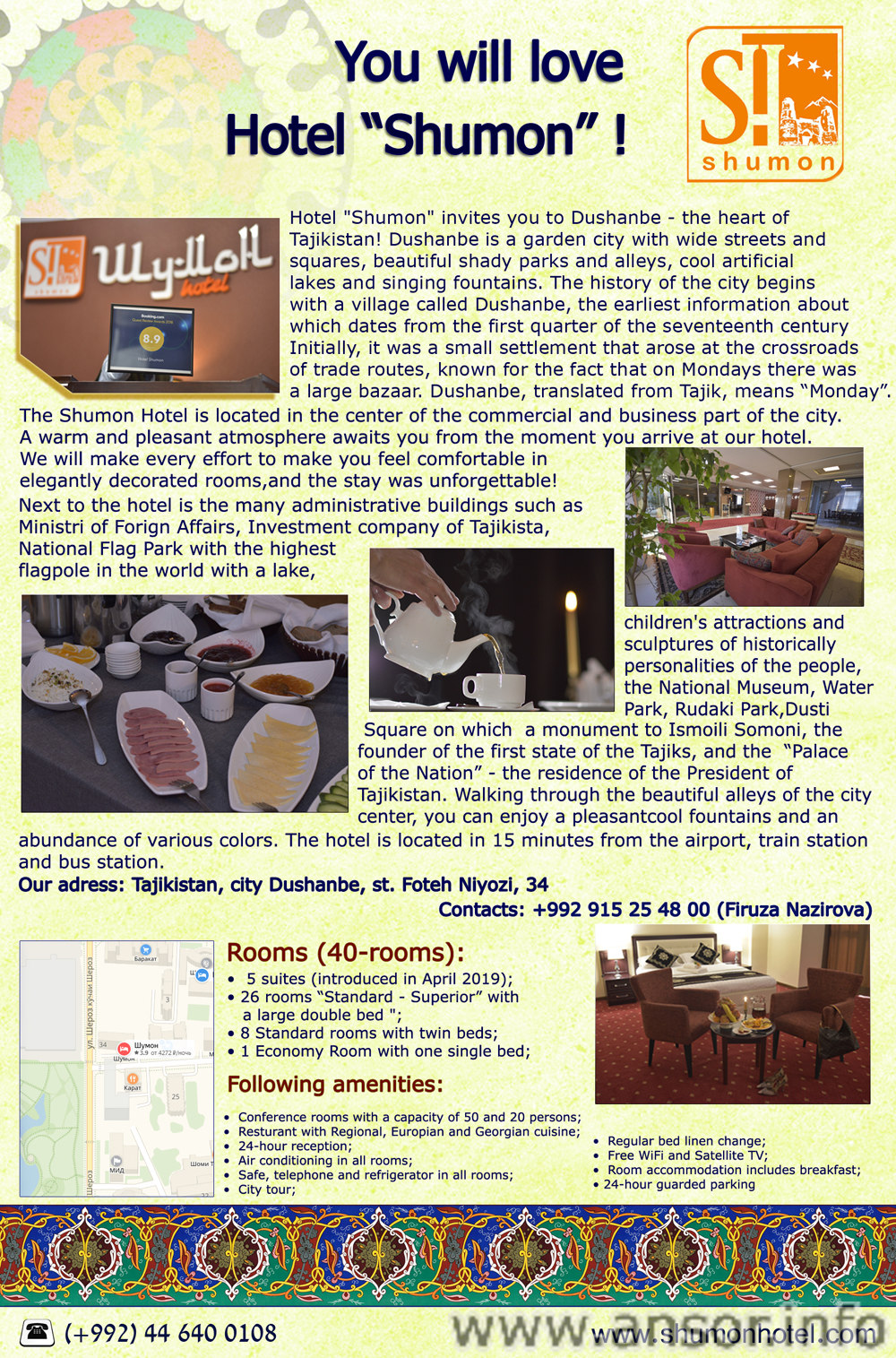 The Shumon Hotel is located in the center of the commercial and business part of the city. A warm and pleasant atmosphere awaits you from the moment you arrive at our hotel. We will make every effort to make you feel comfortable in elegantly decorated rooms,and the stay was unforgettable!

Next to the hotel is the many administrative buildings such as Ministri of Forign Affairs, Investment company of Tajikista, National Flag Park with the highest flagpole in the world with a lake,
Square on which a monument to Ismoili Somoni, the founder of the first state of the Tajiks, and the “Palace of the Nation” – the residence of the President of Tajikistan. Walking through the beautiful alleys of the city center, you can enjoy a pleasantcool fountains and an
abundance of various colors. The hotel is located in 15 minutes from the airport, train station and bus station.
Our adress: Tajikistan, city Dushanbe, st. Foteh Niyozi, 34
Rooms (40-rooms):
• 5 suites (introduced in April 2019);
• 26 rooms “Standard – Superior” with
a large double bed “;
• 8 Standard rooms with twin beds;
• 1 Economy Room with one single bed;

Following amenities:
• Conference rooms with a capacity of 50 and 20 persons;
• Resturant with Regional, Europian and Georgian cuisine;
• 24-hour reception;
• Air conditioning in all rooms;
• Safe, telephone and refrigerator in all rooms;
• City tour;