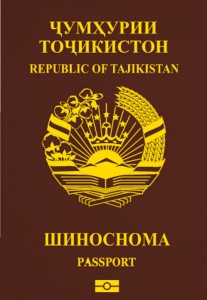 The word “passport Tajikistan,” Tajik is available in view of a document proving his identity which is called “passport of a citizen of Tajikistan.”

The passport of the citizen of Tajikistan is divided as “internal passport (civil)” and the “foreign passport (travel abroad).” This document is intended to travel to some countries, permanent residence in Tajikistan and abroad as well as to return to Tajikistan. Old sample passports approved in 1996 by the Government Resolution of the Republic of Tajikistan and the new in 2014.

Passports are issued by the Ministry of Internal Affairs and the Ministry of Foreign Affairs of the Republic of Tajikistan, diplomatic missions and consular offices of the Republic of Tajikistan abroad, which is called “passport office”. Passport with biometric data is issued to all citizens, including minors. Validity of passports 10 years, for children up to 16 years, three to five years, depending on their age (see. Below).

(It is worth noting that Tajik citizens for entering the Russian Federation must have a passport).

Pay attention that starting from April 1, 2014 in Tajikistan have begun to issue new internal passport which is called the ID cards at the price of $ 9.5 for a period of 10 years, and it is planned to give them in return the old passports. The issuance of new passports (plastic) is started in Dushanbe, and it takes 15 to 20 days. Other areas that is expected innovation.

The old patterns of internal passports of 1996 which was put into operation gradually changed and repainted issued in paper form. Persons with disabilities and veterans of the Great Patriotic War of services for the production of ID cards free of charge. old paper passports are listed on a par with the new. ”

In parallel, the Government of Tajikistan is negotiating with countries for recognition of identity cards and the signing of bilateral agreements with the countries with which Tajikistan visa-free regime. 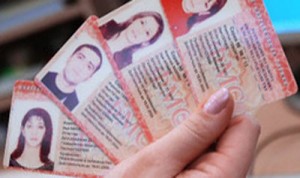 As noted, in the future it is planned that the owner of the passport of the plastic in a single ID-card will be able to use it and as insurance and medical records, and marriage certificates.

The new passports are made of polycarbonate, and the parameters of the card account for 54 to 86 millimeters. There are several security features that will allow to reduce to the minimum limit cases of counterfeiting this document.

Video: The result of the introduction of passports and various barriers.