Spitamen (Taj. Nohiyai Spitamen) – is one of the smallest regions of the Tajikistan formed on September 29, 1926 as part of the Sogd region of the country. At present, the area has a territory of 355.7 square kilometers with a population of 128 thousand. Man.

By the resolution of the Parlament of the Republic of Tajikistan under No. 460 in 21 November 2003 the district was renamed on to “District Spitamen” in honor of Sogdian warlord leader of the rebellion in Sogdia and Bactria against Alexander in 329 BC. Before that, the area bore the name “Nov”, which was taken on behalf of the district center of the village Nou. 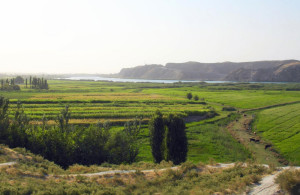 Spitamen located in the valley of the Syr Darya River and its left tributary of the Aksu. It has borders with Matcha district, in the east – Jabbar-Rasulov district, in the west – Ganchi region of Sogd region of Tajikistan, on the south – Laylakskim district of Batken region of Kyrgyzstan.

Weather Spitamen continental and rather crude. In summer the temperature warms up to 44 degrees Celsius in winter and released to – 30 degrees. The level of precipitation per year is 800 mm. Height above sea level on the territory of the region is from 320 to 1270 meters. Geographic coordinates are 40*09 N and 69*22 E.

The area is divided into 7 separate large settlements which in Tajikistan called “Jamoat” -s.

Map of Spitamen by the satellite

The economy of the area Spitamen

In Spitamen operate one breeding farm, almost 500 dehkan farms, one poultry farm, 75 production cooperatives, 10 farms and 182 individual dekhan farms. The total number of shareholders in the area of ​​farmer households is 17 thousand. Man.

In the district there are 10 industrial enterprises that use local raw materials and the total number of employees is about 700 people. In the structure of the industry took the largest processing of cotton and other agricultural products.

The main problems of the industrial enterprises of the region are the high cost of modern technology to meet modern international standards, the lack of competitiveness of products and the limited number of potential buyers for finished manufactured products, the lack of processing of raw materials, lack of electricity, especially in winter, as well as the inefficient functioning of industrial enterprises, the lack of marketing professionals and management, high-interest bank loans and short-term.