Kazakhstan is divided into 5 regions comprising of 14 regions, each of which has its own code, the area specific factors of economy peculiar to the climate and the level of development of social and cultural life.

The largest area of Kazakhstan is the “Western Region” whose territory is 728.5 thousand sq. Kilometers component of the 4 regions, including Aktobe, Mangyshlak, West (Ural) and Atyrau region. West region is considered the most backward area in Kazakhstan, as in these areas is very little arable land, there is no large industrial enterprises and the low number of the population. 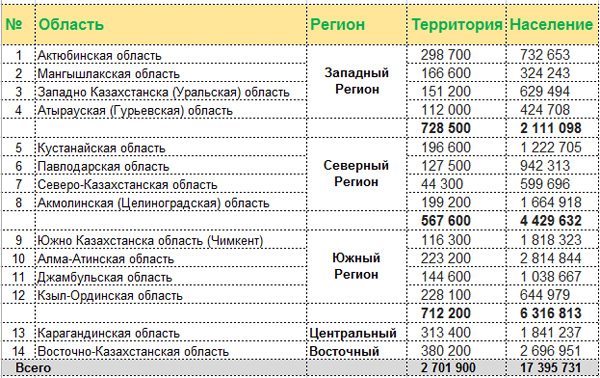 In terms of population, the first place is the South Kazakhstan region where he lives nearly half the population. The reason for the high density of the southern region is a favorable climate for agricultural purposes for the people have accumulated for centuries in these lands, as well as the existence of the city of Almaty former capital of Kazakhstan, home to nearly a million people.

Thus, a summary of each of the regions of Kazakhstan:

It covers an area of 380.2 thousand sq. M. kilometers and is only one area. Population -. 2696 thousand people, the average population density is slightly higher than the figure for the country. It is almost half the country’s forests, subsoil saturated polymetallic, olovovolframovymi and vanadium ores. Main industries – nonferrous metallurgy, machinery, devices and capacitors, power generation, chemical and wood.

Home breadbasket of the country’s leading economic region. The development of agriculture and industry. The area of 567.6 thousand sq. M. kilometers, a population -. 4429 thousand people, density – 7.2 persons per 1 sq. km. and it consists of 4 regions including: Kostanai, Pavlodar, North Kazakhstan and Akmola (Tselinograd).

In the northern region of Kazakhstan are rail and river highway. The subsoil is very rich in stone and brown coal, iron and copper ore, bauxite, gold. Development of fuel and energy, mining industry, machine building, oil refining enterprises are, for the production of ferroalloys, aluminum, tractors. Significant place in the region’s economy takes agribusiness. Three-quarters of the cultivated area set aside for crops. The region is a major producer of industrial crops. The food-processing industry.

The central region of Kazakhstan

Relatively less developed part of the country in the industrial area. The area of ​​the region – 712.2 thousand square kilometers, population 6318 thousand people.. Amounts of 4 regions including South Kazakhstan (Shymkent), Almaty, Zhambyl and Kyzylorda.

Population density is the highest in the country – about 9 people. on 1 square kilometer. The main area of ​​irrigated agriculture, the development of horticulture, viticulture, the cultivation of cotton, sugar beet and rice. On the basis of agriculture have developed food and light industry. Booming metallurgical, mining and chemical industry, machine-building, oil and petroleum industries. Created by the world’s largest complex for the production of phosphate fertilizers and phosphate salts.

The territory of 728.5 square meters. kilometers, population 2111 thousand people, density – 2.8 persons per 1 square kilometer. The region is of 4 areas including Aktobe, Mangyshlak, West Kazakhstan (Ural), Atyrau (Guryev).
West region is rich in mineral resources. Opened about a thousand deposits of 50 kinds of metallic and non-metallic minerals: oil and gas, chromites, manganese, nickel, phosphates, copper. Tengiz field is comparable to the largest deposits in the world. The leading place in the economy takes two production cycles – oil and gas and chemical and fish-processing. Developed the production of oil and x-ray equipment, ferroalloys, mineral fertilizers. For the development and the economic development of the region are actively involved in foreign investment, a number of major joint ventures with foreign investors.

Car and telephone codes of the Regions of Kazakhstan (new numbers) 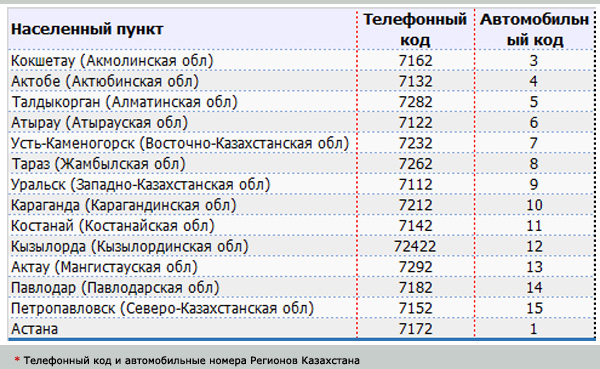 Thus Kazakhstan has divided purely in terms of geographical location and not a chaotic manner.