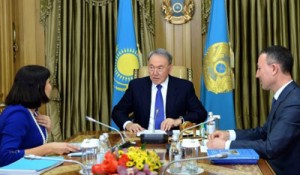 The problems of modern Kazakhstan laid mainly in ecology, language, politics, economy and education which the bowl is possible to meet the public and the media.

On the existing problems in Kazakhstan it has long been known to the world community and in particular neighboring countries, to address which are sent as internal forces, including the Government of Kazakhstan diligence and surrounding countries.

2. The political problems of Kazakhstan:

3. The economic problems of Kazakhstan:

Kazakhstan’s economy and the economy like Russia, Venezuela and some other countries petroleum exporters depend heavily on the price of black gold. Approximately 85% of Kazakhstan’s exports are energy products that with decline in their prices greatly affect the development of Kazakhstan and social life of the country’s population. This is to say that the country is almost lives on subsidized money from inflated oil prices and as has become clear decline in oil prices in late 2014 and in 2008 the treasury is very affected in Kazakhstan (more than 2 times).

Because Kazakhstan is still not looking at the wealth of the country people went to Russia to work, and even for permanent residence because in some areas the rate of unemployment and wages is considered to be very worried.

Although the country has been making efforts for economic independence, but it is unattainable. Thus, according to what has been said the main problems can be said that Kazakhstan, as there were no rich or beautiful, it is not ideal for the living and the introduction of business in mind the existing problems of the country.