Nowruz – is the name of the Iranian New Year also known as Persian New Year, celebrated by mostly Iranian peoples and Turkic peoples worldwide as the beginning of the new year. It has been celebrated for over 3,000 years in the Balkans, the Black Sea Basin, the Caucasus, Central Asia, and the Middle East. It marks the first day of Farvardin month and spring in Iranian calendar 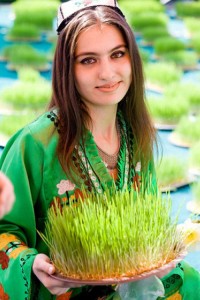 Navruz is one of the ancient holidays in the isk orld that ” • (loin other occasions with its special trait, which makes it ursiv-4 consist of protest character, hut a inwlit\ global phenomena. Navruz is a woitlw tkii,c0\\11,eorlitd_oaryuandmitingdotsand-“1: generating former ancestral human ties. kijik Oran) eviturze .4+-z represents the living soul and tradition. Nflorcover. this hcjda:, a spiritually condensable of generations :Ind an epoch of philt cal-historical succession core embodiment of IranS PeoPAt UCZeir-Si On is the main organizing factor and tr maintaining_ ,….un um cultural- historical identity of Iran people’s civilization ien Navruz is one of the important holidays that expresses onto( the best traits of artistic-aesthetic heritage of tajik Oran) people at therefore this holiday requires perception in modern tu,’storicki. cultural interpretations. Being an integral part of existence, custom and labor activities, Navruz holiday are as s had an active impact DE social, creative and spiritual life of people. Researches about Nave’ are stipulated with different historical-cultural factors – spiritualte. and aesthetic values are not obsolescent. as one of the important spiritual part of tajik (iran) people culture, genetic units of custom and traditional sources of iran people during the history_ Therefore_ studies about this wonderful national holiday are necessary for uri derstanding veritable humanist sources of Navruz- its specilic histo ry and originality as worldwide cultural phenomena.

Without deep studies about the written sources (especially be-fore Arabian conquest). it is impossible to reveal historical impor-tance of this great holiday in the history of iran people’s culture and some other nation of Middle East. All the more. without reliable sources it is difficult to vindicate historical evolution of INPaspr1/414 to reveal the problem of its correlation with modern customs and tradt-lions of tajik (iran) and central asian people. Especially the COnnteets ing beginning of Navruz is not from heathen beliefs or esoteric sect not from race, ethnos or geography. moreover not from blood and gender, but a culture with a big letter. Veritable national Navruz holiday is one of the most typical phenomena of talk isik (Iran) cure. and represents its live, creative soul and one of the most rich, an-dent tradition. Alone with this, holiday Navruz, spiritually cow
ph ty to se-tit tt tt C.1 a ti a