It is known that energy influences all parts of social life. Being the basis of economy in any country, it defines social conditions of life, has a direct or indirect influence on the environment. Tajikistan endowed with rich hydropower resources, hydro potential is estimated to be 527 billion kWh per year. 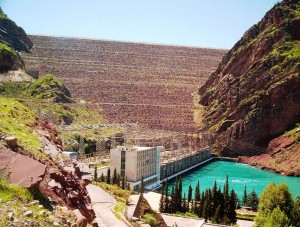 Tajikistan is a mountainous country with the highest surface on the Earth from 3000 to 7495 meters. Almost half of the territory of the country is situated at the level above 3000 meters. In this regard the nature itself provides Tajikistan with enormous opportunities in the sphere of clean and renewable sources of energy. On average the extensive river network in Tajikistan is about 0,6km/km2. This shows that the Republic of Tajikistan has unlimited hydropower reserves, their rational use wouldn’t just benefit the people of our country, but also countries in the region.

Tajikistan is on the 85th place in scale, but for hydropower reserves it takes the 8th place after China, Russia, the USA, Brazil, Zaire, India and Canada.

There is a great perspective for the development of quite cheap and clean electric energy in the country. It is very important in terms of regional and global contribution to reduce ecological pressure on the natural environment, carbon cuts into the atmosphere and negative impact on climate change.

Now, Tajikistan continues to implement 10 investment projects for the amount of 6 billion somoni. Vital energy projects, such as rehabilitation work on the Rogun hydroelectric power station, repair and reconstruction of already existing energy constructions like Nurek, Karakum, Sarband, Pamir and Varzob are being implemented involving internal and external investments. And at the same time, working with development partners, including World Bank,  the research on the Rogun HPS project continues, as well as on the power transmission line «CASA-1000» project.

The main hydropower sources of Tajikistan are rivers Vakhsh and Pyanj. The total length of Vakhsh is 786km, the area of the basin is 39,100 km2, the average discharge of water is 156 m3/s. River has its sourse in Pamir in the region of the E.Korjenevskoy peak (7105 meters above the sea level). Tigrovaya Balka nature reserve is located at the mouth of river Vakhsh.

There are 569 mountain lakes with the total area of 1737km2, and they are mainly located at the altitudes of 2800-3500 meters.Vakhsh flows mainly in the narrow valley and sometimes it turns into a deep gorge; in 100km from the mouth flows into the Vakhsh Valley, where it divides into bayous, the water of which is used for irrigation and water supply. The water power mostly comes from ice and snow, and to a lesser extent from rain. There are floods in the period of the melting of glaciers: from May to September, and less in November-April. The average discharge of the normal river flow is 660m3/s, the highest (in July)-3,120m3/s, the lowest(in February)-130m3/s. The water of Vakhsh , as other Central Asian rivers, differed with its high turbidity.

But after building Nurek HPS the water became transparent and blue. Nurek hydropower station on the Vakhsh River with the installed capacity of  3000MW and an average annual power generation is 11,2 billion kWh per year. Below the Nurek HPS island there is Baypazinkskaya HPS, which consists of 4 aggregates each 150MW with annual power generation 2,5billion kWh per year. The cascade of Vakhsh HPS with the total capacity of 285MW is also built on the Vakhsh river and works successfully.

Strategically important object of hydropower for the coming years is construction of the biggest Rogun HPS in Central Asia, which was started in 1976. The designed capacity of Rogun HPS equals 3600MW with 6 aggregates each 600MW and annual electricity generation of 13,1billion kWh per year. Through long term regulations of  run-off patterns of Vakhsh, Rogun HPS will  make it possible not just increase the total power generation of HPS cascades on the river Vakhsh, but the most important thing – its functioning in any necessary regime, producing not only summer, but also scarce winter energy in the region. Sangtuda HPS-1. Capasity- 670MW, annual electricity generation is about 3,5billion kWh per year, have begun operating in 2009. Sangtuda HPS-1 will greatly reduce the shortage of electricity in the hardest winter season. The construction of Sangtuda HPS-2 with the capacity of 220MW will be finished by the end of 2014. With the commissioning of Rogun and Sangtuda HPS №1 and 2 the production of ecologically clean electric power in the Republic will reach 31-33 billion kWh per year. The own need of the Republic is 23-25billion kWh per year, the excess of hydropower could amount to approximately 8-10 billion kWh per year. As the completion of construction: 2nd turn of Rogun HPS; Shurob HPS on the river Vakhsh.

The river Pyanj is formed by merge of river Pamir and Surhandarya. It flows between Afghanistan (the left bank) and Tajikistan, except for the small piece of land in Hamadoni region in Khatlon province, where as a result of changes in flow patterns, a part of Tajik lands were on the left bank of the river. The length of this river is 921km, the area of the basin is114,000 km2, the average discharge of water is 1000m3/s.

The project implementation of the construction of Dashtidjum HPS- the first from the 14 projects for the development of hydropower resources of the river Pyanj in Tajikistan. The construction of Dashtijum waterworks offers great opportunities for the energy use of the cascade levels. Dashtijum waterwork is located at the end of extensive intermountain basin stretching from the Obi-Minou until Andjirobi-Poyon village, the main territory of which is on the left (afghan) bank. “At backwater flooding zone of future reservoir fall the undeveloped lands of Hamadoniand Kalayhumb regions of Tajikistan and Badahshan province of Afghanistan. There are 14 small localities in the flooding area on the territory of Tajikistan and 13 more localities are located on the territory of Afghanistan”.

Total capacity of the reservoir is 17,6billion m3. It provides the construction of the dam riprap with loamy nucleas. The height of the dam will be 320m. An open HPS building will be furnished with 12 aggregates. Annul power generation on the station will be 15,6billion kWh.

The construction of the HPS in Tajikistan together with the power generation will solve another problem- the regulation of the river flow for irrigation of all the region of Central Asia and Afghanistan as a whole.