The Istiqlol clinic is a state multi-profile medical institution of the  Dushanbe city, located along the capital, Nemata Karabaeva avenue, built on an area of ​​11 hectares between the Republican Diagnostic Center and the Sultoni Kabir Market. This large and modern clinic is built for more than 750 million rubles. Somoni and with all the conditions of diagnosis and treatment. It is equipped with the most modern medical equipment in Central Asia.

Istiklol Medical Complex was opened with the participation of the President of the Republic of Tajikistan on March 4, 2016. Has all the conditions for complex treatment of various diseases. It has no analogue in its uniqueness and universality, not only in Tajikistan, but throughout Central Asia. The medical complex consists of 38 one-storey and nine-storey buildings, it has all the necessary conditions for reception, examination, diagnosis, treatment, rest and rehabilitation.

The Istiklol clinic was built for 650 beds, the hospital for receiving 800 visitors in one shift, a modern sanatorium for 200 beds includes 35 different from 1 to 9 storey buildings. The sanatorium of this institution will have the best conditions for treatment, rehabilitation, recreation, entertainment, including physiotherapy, Turkish and Finnish baths, gyms and portals, a winter garden and other conditions.

Here work more than 3000 specialists including 1150 doctors. Alas, most of the people of Tajikistan are not very pleased with the quality of treatment at the Istiklol clinic, since the top doctors of the republic do not work there. The only thing that they have good is that it is clean and luxurious rooms and beds.

For the clinic to start working in it, a number of medical personnel from various hospitals and a polyclinic in the city of Dushanbe forcibly brought a number of them so that they could establish a good service in the field of treating diseases of Tajik citizens.

Prices in Istiklol are not high because it is public. In addition, they have established such a policy that the clients were many and therefore the prices were reduced by 10-20% compared to other hospitals in Dushanbe.

In this medical institution you can go from two sides including to go to the hospital with the help of personal cars better from the eastern part (rear) where the parking is. But basically almost 80-90% of the population comes in from the frontal part – the main entrance of the hospital where patients are admitted in the 5th building. In this case, there is also parking on both sides of the main gate along the street Negmat Kara-baev, but there it is mostly difficult to find a free place.

In the center there are 620 kinds of modern equipment produced by the advanced countries of the world, including Russia, China, the United States of America, Japan, Germany, Finland and the Czech Republic for diagnosis and treatment. 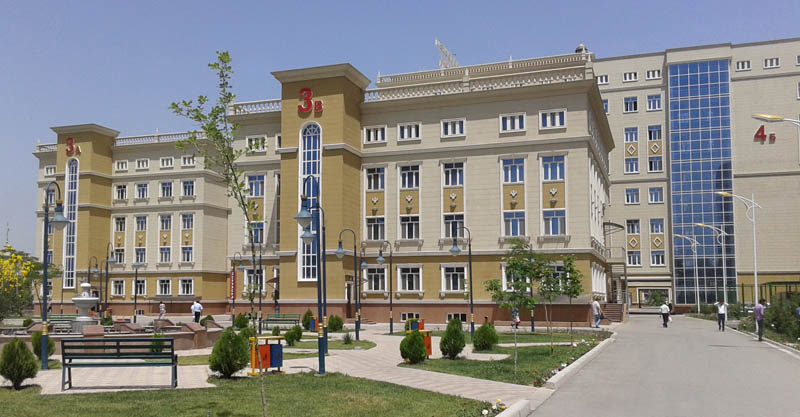 On the second and eighth floors there is a phytotherapy department, in which various preparations are made from medicinal plants and herbs of Tajikistan.

For treatment patients on the eighth floor of this building there are separate gyms for men, women and children, equipped with modern sports equipment.

In total, this complex has 1000 special rooms, 650 beds (150 adults, 182 children, 213 children’s somatic beds, and 100 beds in the maternity hospital), the complex is designed to receive 800 people in one shift, in it there are 47 administrative, auxiliary, medical departments and more than 50 stationary departments. The complex has an emergency medical substation, which has 15 special vehicles, including 3 brigades of ambulances and 1 ambulance car for transportation of newborns. 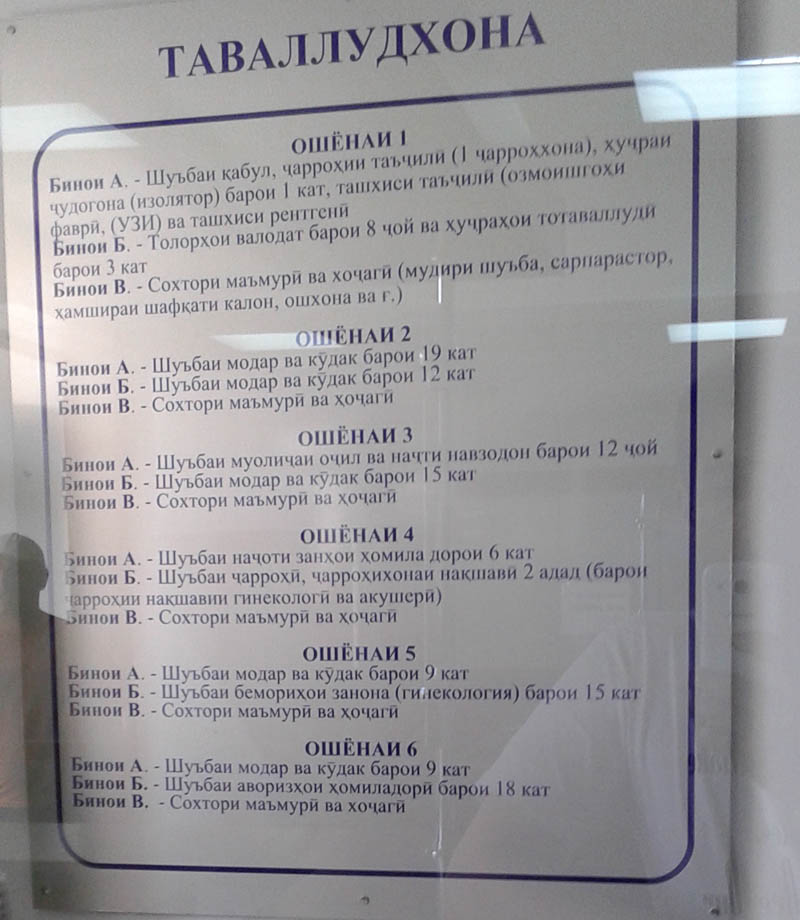 Also, there are various auxiliary facilities, an assembly hall for 260 seats, a dining room for 150 people, a laundry, a sports center, a shop for the production of medicines, etc. The complex is considered the largest inpatient hospital in the capital, 75% of its capacity is directed to the health of the mother and child.

For the first time in the country’s healthcare structure, activities have been carried out in the direction of surgery for children’s cardiovascular diseases, a separate structure for hemodialysis of children’s blood has been created, a branch of clinical engineering, traditional medicine and 50 resuscitation beds.

On September 6, 2011, the President of the Republic of Tajikistan, laying the first brick and capsule with a message to future generations, launched the construction of a 650,000-bed city hospital and a clinic for receiving 800 visitors in one shift.

This complex is the largest healthcare facility in Tajikistan not only in the period of independence, but also of the former Soviet Union and, probably, has no analogues in Central Asia. The complex is the first diversified medical institution in the country, which is built in accordance with modern requirements, which has all the conditions for diagnosis and treatment, emergency medical care and rehabilitation.

On the basis of this complex there are 14 branch departments of the Tajik State Medical Institute, the Institute of Postgraduate Training of Healthcare Workers of Tajikistan, the Republican Medical College and others that can fruitfully use the complex as an excellent educational, scientific base, including for internships.