Khatlon region (abbreviated Khatlon) – one of the most populated and irrigated areas of Tajikistan is located in the southwestern part of the country with a population of 3.1 million people, representing 35% of the population. Khatlon consolidates the former provinces of Kulob and Kurgan Tepa, which remain topographically separated by a mountain ridge.  Accordingly, the new province is also referred to as eastern and western Khatlon, corresponding respectively to its constituent parts, Kulob and KurgonTepa.  Occupying an area of 24,800 km2 or 9,600 square miles (constituting 17 percent of Tajikistan’s territory), Khatlon is bounded by Afghanistan on the south and southeast, Uzbekistan on the west, the Districts of Republican Subordination (centered at Dushanbe) on the north, and Badakhshan Province on the northeast.  The latter two plus Sughd Province and Khatlon Province constitute the four first-level administrative units of Tajikistan Republic. 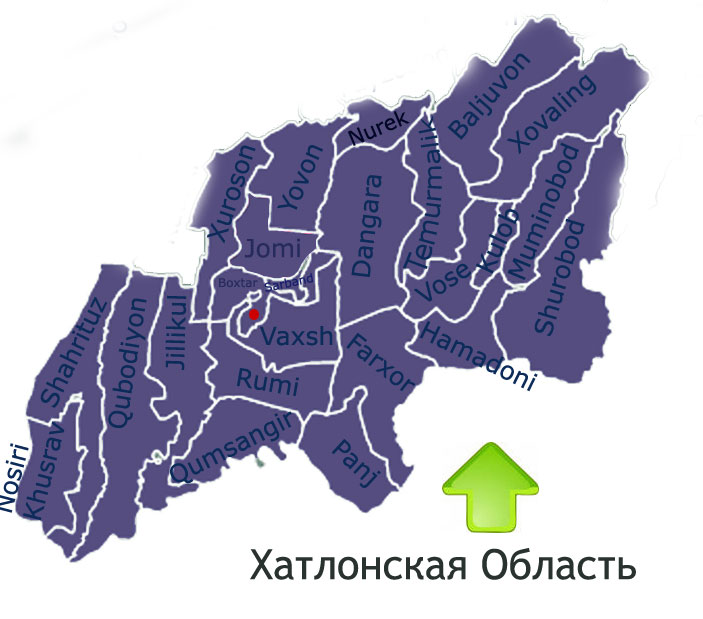 Khatlon established on December 2-nd, 1992, and the administrative center of the region is the city of QurgonTeppa (Kurgontepa). The composition of the Khatlon region consists of 5 cities and 19 areas listed below with a description of the territory and the population.

Live Map of Khatlon by Google

Video of the Khatlon region:

The climate of the Khatlon region is continental. Among other areas of Tajikistan’s Khatlon considered the hottest place in Tajikistan in particular areas in Shahrituz and Beshkent. Winter in the plains of the Khatlon region is quite mild and the temperature reaches at least to -20 degrees Celsius and -35 in the mountains. Summer in the plains is very harsh and the air temperature is up to +50 Celsius. Precipitation is less than the central areas of the country and are mainly rain from October to March.

The Khatlon region is located south-east of Dushanbe. One of the biggest cities of the Khatlon region is Kulyab which consists of Danghara, Vose, Temurmalik, Muminabad, Khovaling, Baljuvan, Parkhar, Hamadoni and Shurabad districts. In the west Kulyab borders with the Kurgan-Tyube zone where the Pyanj River flows in the eastern outskirt of the latter. The closer you approach Pyanj, the mountain chains slowly lower and a hot windless oasis appear before you. Tairisu, Yakhsu and Kyzylsu – rivers which originate in these mountains carry life-giving moisture to the valley. In the Kulyab oasis even in ancient times crops were cultivated in the dry lands. In the higher mountain areas the population is mainly engaged in cattle breeding. In the lower mountain areas and the river valleys cotton and vegetables are cultivated and also reich gardens and vineyards are planted. 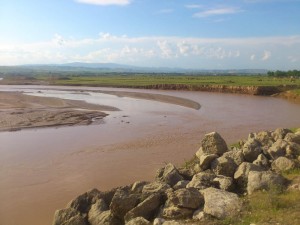 It is a one-hour flight from Dushanbe airport to Kulyab. You arrive in the international airport which is located 12km away from the city. The international airport of Kulyab has flight connections with the Soghd region and regional centre of Kurghan-tube. You can reach Kulyab by driving from Dushanbe by bus or car. Your route will take you through Nurek and Vakhdat and then you will cross the Gissar valley, drive up to Chormagzak pass and on a steep serpentine road you descend down to Vakhsh. The winding and twisting road will take you to the mountain range of Rangon, and after Chormagzak pass you will descend to a wonderful valley of the Pulisangin gorge.

The valleys on the way to Kulyab are extraordinarilyy beautiful during spring time, when the hills are covered with vast red carpets of tulips and poppies. These picturesque valleys were the main places for settlements in ancient times. Archeologists found that men from the Stone Age era lived here in caves. Also settlements were discovered from the populations who lived here 2000 years ago. The territory of the modern Kulyab was part of Akhamenids state in VI-IV B.C. As a result of invasions, the king of Akhamenids – Kir, took possession of the entire territory which also included Bactria. In IV B.C. Alexander the Great, after defeating Akhamenids kingdom, invaded the territories of Central Asia. In spring of 329 he had invaded almost the whole of Bactria, crossing Termez and Kabadiyan he then moved to the area of the modern Kulyab. Very often revolts against Alexander the Great rose up in Bactria. Rebels hold out most of all in the area of Khuttalyan (in ancient times the area between Pyanj and Vakhsh). Constructing strong points of the Greek-Macedonian colonization, Alexander built a range of city-outposts. One of them was erected in Khuttalene, which was named Alexandriya on Ox (Sikandara). In the opinion of the famous Tajik scholar Bobojon Gafurov, the city of Alexandria on Ox (Amu-Darya) was placed approximately in the area of today’s Kulyab. Due to close cultural relations with Greece and India in the II A.D. Buddhism spread in the state of Khuttal. A 13 meter Buddha statue was recovered only recently and serves as evidence of this period. Remnants of a Buddhist monastery of the VII-VIII centuries (sanctuaries, monastic cells, stupa, sculptures, and petroglypshs) are well preserved here. Archeologists identified that the monastery in Ajinateppa consisted of two parts (temple and monastery), two rectangular courts, surrounded by buildings and strong walls.

In the 2nd centuary B.C. part of Central Asia was populated by the tribe of tokhars (Tokharistan) and this territory was divided into several small, independent or half independent states, one of which was called Khuttalyan (Khatlon). 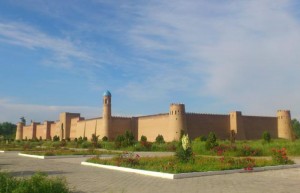 Tokharistan was divided into 24 small half independent possessions, nominally subordinate to the Turkic Khaganate. Khutalyan was one of the most developed part of Takharistan. In the 4th centuary B.C. Khuttal emerged as an independent state occupying territory between Pyanj and Vakhsh. The main economic activity of the state includes livestock breeding and especially horse breeding. Khuttal became famous at that time for rearing horses, to be used to cultivated oasis of Central Asia. Horses from Khuttal were praised in Arabic-Persian poetry. The capital of Khuttal according to scholars’ findings was Khulbuk, which is located at the territory of today’s Vose district, in the outskirts of the present Kurban-Shaid village. Khulbuk was one of the biggest cities in Central Asia. Its central part occupied the area of 70 ha, and in the south-western part included an elevated citadel. During excavations remnants of a wealthy decorated palace were discovered. It was discovered that in the ancient town there was also a sewerage system, water supply and heating systems with canals and ceramic pipes also discovered. Rooms were heated with big jugs – khums, dug in the floor. A jug was filled with wood charcoal, which was heated and transferred heat to the floor. During excavations Khulbuk chess made from ivory were also found. Twenty whole and eight dilapidated figures were discovered.

Kulyab as a city name was first mentioned in the 13th century. It was located on one of the routes of the Silk Road and had close trade and cultural links with many countries of the East and West. During medieval times Kulyab was the centre of the bekstva of the Bukhara khanstvo. Later, during the 17-19th centuries, some 40 poets lived and created their works in Kulyab. Some of the most famous were Naseh (Abdurahmon Khoja), Khoji Husaini Kangurti, Bismil, and Shohi. Remains of one of the eminent 15th centuary, poet, philosopher and thinker rest in the mausoleum of Mir Sayid Ali Hamadoni. Except Sayid Ali Hamadoni, his son Muhammad and numerous relatives are also buried here. 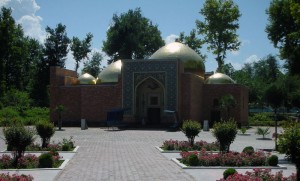 Close to the village Vose, 22 km to south-west of Kulyab, a unique natural monument – the 900 meter high salt mountain of Khoja Mumin, rises high up above the surrounding plains. The impressive salt dome has an oval form, and its length in diameter reaches 8.5km. The slopes of Khoja-Mumin are steep at the foot and the height of the bare salt walls reaches at times 500m. According to the assessments of geologists, salt has been accumulating here for more than 20 thousand years and contains more than 30 billion tonnes of cooking salt. Khoja Mumin is known also by its healing properties which can treat more the 60 different conditions. Another miracle of Khoja Mumin are its caves, one of the biggest is 350 m long. Wonderful and unusual sounds are originated by wind inside the caves, which pass through long and thin salt icicles – stalactites. Not far from Khoja Mumin another salt massif rises– Khoja Sartis. Salt reserves are even bigger there than in Khoja Mumin with more than 40 billion tonnes.

Not far from today’s Kugan Tube there is a remarkable historic monument – ruins of the Lagman ancient settlement which dates back to the 10-13th centuries. During the mid-20th century excavation works were carried out here, during which water supply pipes, wells laid with bricks and fortress walls with towers were discovered. This city during its most prosperous period was one of the largest populated cities of ancient Bactria and occupied an area of some 43 ha.

The mausoleum of Khoja Mashad, located in the village of Saed (outskirts of Kurgan-Tube) is the only preserved wooden carved mausoleum in Central Asia. The location of the mausoleum is known as “Kabodian” and from time immemorial its attracted travelers. Khoja Mashad – a famous figure in the Islamic world came to Kabodian from the Middle East approximately at the end of of the 9th and beginning of the 10th centuries. 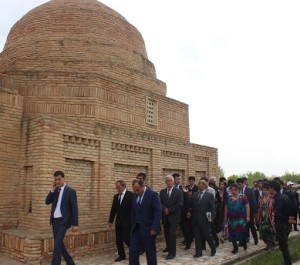 In 1877, local people literally discovered a treasure chest in the area of Takhti Kubata on a washed away bank near Amudarya,. The treasure consisted of more than 2000 gold and silver coins and gold ornaments of the 4th centuary A.D which were sold to three merchants from Bukhara as part of a caravan on their way to Northern India (today’s area of Pakistan). On their way the merchants were robbed by Afghan nomads but luckily due to the interference of an influential Englishman parts of the treasure were returned to the merchants and parts remained in the hands of the leader of the nomad tribe. The merchants, after reaching Ravalpindi city, sold the treasure to representatives of the English administration which then passed the gold and silver to the British Museum in London. In 1976 archeologists had started excavation of the ancient settlement in an area near Takhti Kubad (34 km from Kabodian settlement in the place of the confluence of rivers Vakhsh and Pyanj). In the center of the settlement an old temple was excavated which was named as “Ox Temple”. The temple was devoted to the God of Rivers which was part of a cult that existed here from ancient times. In the big temple built in 4th centurary B.C. wonderful discoveries were made including a bust of Alexander the Great in the appearance of Hercules, covered with images of lions holding fallow deer in its paws, and the biggest collection of arrowheads (more than 5 thousand), ormamental items and weapons of Greek-Macedonian warriors.

Among the burning hot desert, 12 km away from Shaartuz, five large water springs spout from earth. This spring is called Chiluchor Chashma (forty four springs) which has long served as a place for pilgrimage for many Tajik people. A legend tells of the pious Khalif Ali who had seen the dried up Romit River and when he reached the Chiluchor Chashma he asked for water from Allah. A mausoleum rises in the territory of Chiluchor Chashma where the saint by the name of Kambar Bobo is buried.

You can experience fascinating trips through famous historical places and beautiful natural landscapes. Visit this wonderful corner of Tajikistan and you will learn about the entire diversity of fauna and flora, discover amazing worlds of ancient civilizations and century old traditions and culture of the modern population of the Khatlon region.