In Tajikistan, near the town of Khorog – the administrative center of the Gorno-Badakhshan region – is Ishkashim village. In its vicinity you can see the well-preserved walls and fortresses Yachun Kaakha. 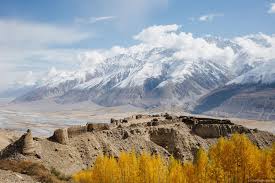 In the end I millennium BC, because of the threat of military attacks from neighbors, as well as to control the movement of people and goods flows from the Pamir in Bactria, India, Iran and back, begins the construction of powerful fortifications. One of them – the fortress Yamchun (also known as Kafir-kala). Yamchun fortress was built around the III century BC on the slopes of the cliff, which was favorably used in its construction.

From the height of the triangular shape is clearly visible fortress divided accordingly into three parts. The first – a citadel with bastions and barracks. They were surrounded by walls, fortified towers. The other two parts – the broad areas for the conduct of hostilities. Each of the areas surrounded by thick walls, fortified by 36 towers with loopholes. The fortress had three rings of double walls up to 950 m. And a width of up to 400 m.

The walls of the fortress double, composed of carefully processed stone tile, delivered by builders from various remote locations. The outer wall thickness up to two meters is composed entirely of stone. The inner wall is also stone, but much thinner: only 50-60 cm.

The entire fortress “connected” a succession of towers with loopholes, staggered and inclined at a slight angle down to the soldiers could make the firing of the whole valley. Some loopholes are addressed to the outside and the inside of the fortress, which greatly increased its defense. Castle impresses with its size. This powerful military installation was crucial to these places.