Farkhor (taj. Фархор) – District with administrative center Farhor town. Farkhor area include subordinated Khatlon region of Tajikistan. The total area is 1 183 square kilometers and a population is 152 thousand people (2015).
The region was founded on november 23, 1930 and it is located in the southern part of the country on the Panj river valley, 198 km south-east of Dushanbe near the Kulob region and Afghanistan. Coordinates: 37 ° 30 ‘north latitude, 69 ° 24′ east longitude. The area is also known under the name “Parkhar” that is characteristic of most Uzbek pronunciation in English but also known by the name Parkhar. The old historical name mentioned as Bargara or Fargar. 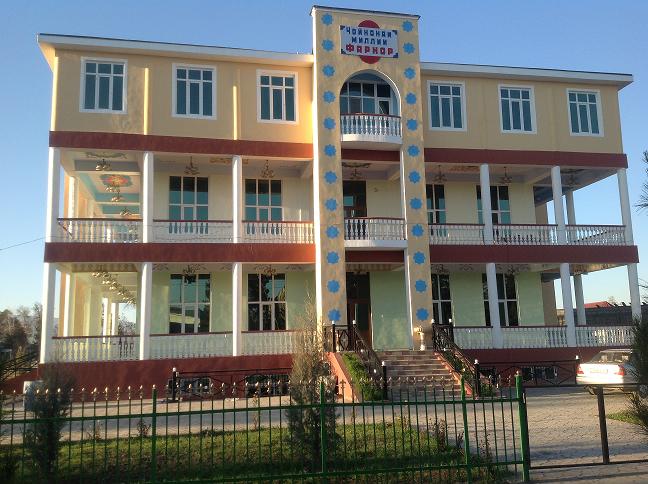 Farkhar located between the very plurality of the Tajik areas including the west borders of the Panj, Dzhalolidi Rumi and Vakhsh district, Dangara in north and Vose district, with east Hamadoni and from the south with the province of Takhar Republic of Afghanistan. The total area Farkhor area is 118,311 hectares, of which 25 thousand irrigated and 92 thousand rainfed land.

The altitude ranges from 440 to 1390 meters. Precipitation per year is 500-700 mm. Weather: air temperature in summer reaches up to + 48 and in winter to – 22 degrees to aim. The climate is continental. The main agricultural activity is the cultivation of cotton and grain crops because of the excessive heat of summer gardening in this area is not very favorable.

On the southern part of the district runs the largest river Panj which separates the border between Tajikistan and Afghanistan. The area is divided into the following major settlements: urban Farhor village with a population of 20 thousand, pos.. Vatan 18 thousand, 10 thousand Galaba, Gulshan 11 thousand, Darkad – 10.5 thousand, 10.6 thousand Dehkanaryk, Zafar – 11.1 thousand and 12 thousand Komsomolabad.

Name Farkhar even in historical writings including in “Shahnameh of Firdausi” placename “Fargar” is mentioned in connection with the events that took place in the days of the Turanian king Afrasiab.

Farkhar on the world map (satellite)

On the territory of the district there is no industrial and processing enterprises. The population is mainly engaged in agriculture and the service sector, including trade. Under the agricultural fall 72 thousand hectares of land of 22 thousand of whom hold irrigated land. Gardens make up only 300 hectares., and 15 hectares of vineyards. The rest of the land is mainly focused on the cultivation of cotton and grain crops. For cotton processing functions ginneries.
The district has an airport that was built in Soviet times, but there is no railway and everything is transported by road ways. In Farkhar is also located only a military base in India “Farhor” and used by the Indian Air Force at an open planned in Hissar district.

Key indicators of the Farhor